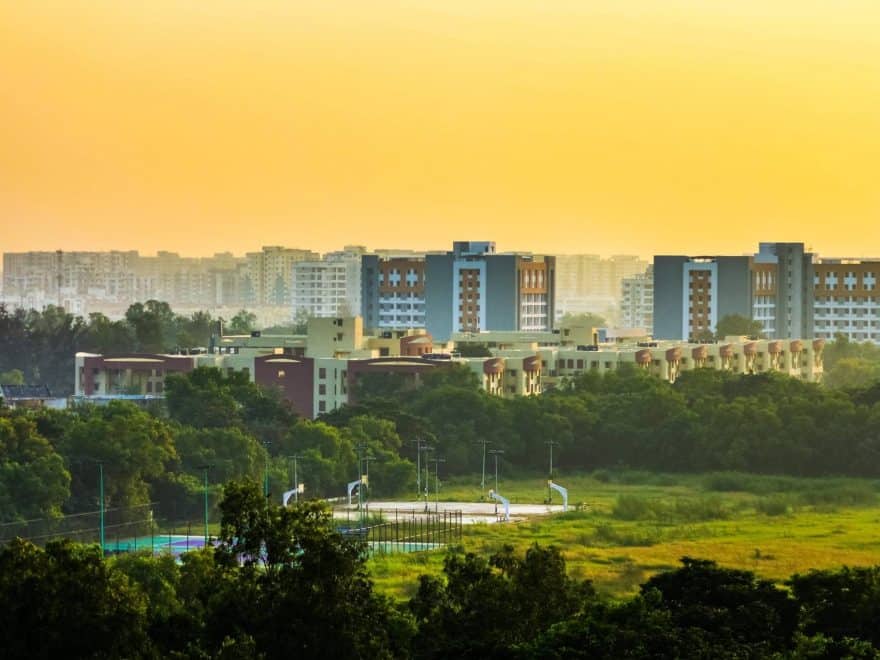 Sardar Vallabhbhai National Institute Of Technology, Surat is one of the 17 Regional Engineering Colleges that were established as joint venture of the Government of India and the Government of Gujarat. It was established in June 1961 with facilities to run Bachelor’s Degree Programmes in Civil, Electrical and Mechanical Engineering disciplines. It is now changed to National Institute of Technology along with other RECs.

Campus:The port city of Surat is one of the most important areas of the state of Gujarat. A major industrial hub and a city with a high standard of living, Surat is one of the major cities of the country. The City of Surat is located in the southern part of Gujarat at 21o 15′ N latitude and 72o 52′ E longitude on the southern bank of River Tapi. The city forms a major urban core in the Ahmedabad-Bombay regional corridor, centrally placed between both the settlements, at a distance of 260 km. North of Bombay and 224 kms. South of Ahmedabad. The industries in Surat are traditionally dominated by small scale manufacturing units including diamond cutting, textiles, gold thread, dyeing and printing which were largely home based and cater to the domestic market. Diamond cutting and polishing, however, are for export market. The medium and large-scale industries are mostly located at the five industrial estates in and around the city

Central library:The Central Library, SVNIT Surat is one amongst major technological libraries in the area of science, engineering and technology. The Library was established in 1968. It has completed nearly 35 years and has built a large collection of books, journals and non-book materials. It also has a rich collection of resources in electronic media available locally on the Institute Intranet and accessible on the Web. It caters to the needs of large groups of users including more than 2000 students, 200 faculty, 150 research scholars and equally large number of supporting staff. It has computerized all its house-keeping activities using a global software that is being maintained and updated regularly. It also facilitates industries, individual consultants and corporates to access online database and journals. It uses state-of-the-art technology in its functioning and services.Not only having a very good reference section, Library has been subscribed to access INDEST by MHRD.

Hostel:SVNIT has eleven hostels with nine for boys and two dedicated to girls named after personalities of India. Each hostel is administrated by the Chief Hostel Warden. Each hostel elects representatives from the hostel residents for areas like Entertainment, Computer Facility, Network, Environment, and Cultural. Two mega hostels for boys and one mega hostel for girls with large number of facilities have been constructed.

Mindbend is SVNIT’s annual technical festival, the largest of its kind in Gujarat. Technical competitions and events covering all areas of engineering expose students across India to practical engineering. There are competitions, guest lectures, workshops and quizzes. The robotics events of Mindbend are famous in Westzone.

Sparsh is SVNIT’s annual cultural festival. It usually takes place in the second week of March. The largest of its kind in South Gujarat, this five-day festival consists of literary and debating events/competitions in the morning and gala cultural shows in the evenings. The ‘Sparsh Nites’ are the Singing Nite, Dance and Skit Nite, Fashion Nite, Fun-n-Fair and the Celebrity Nite. The last of these is a grand event that has seen performances by Euphoria, Udit Narayan, Shaan, Abhijeet Bhattacharya.