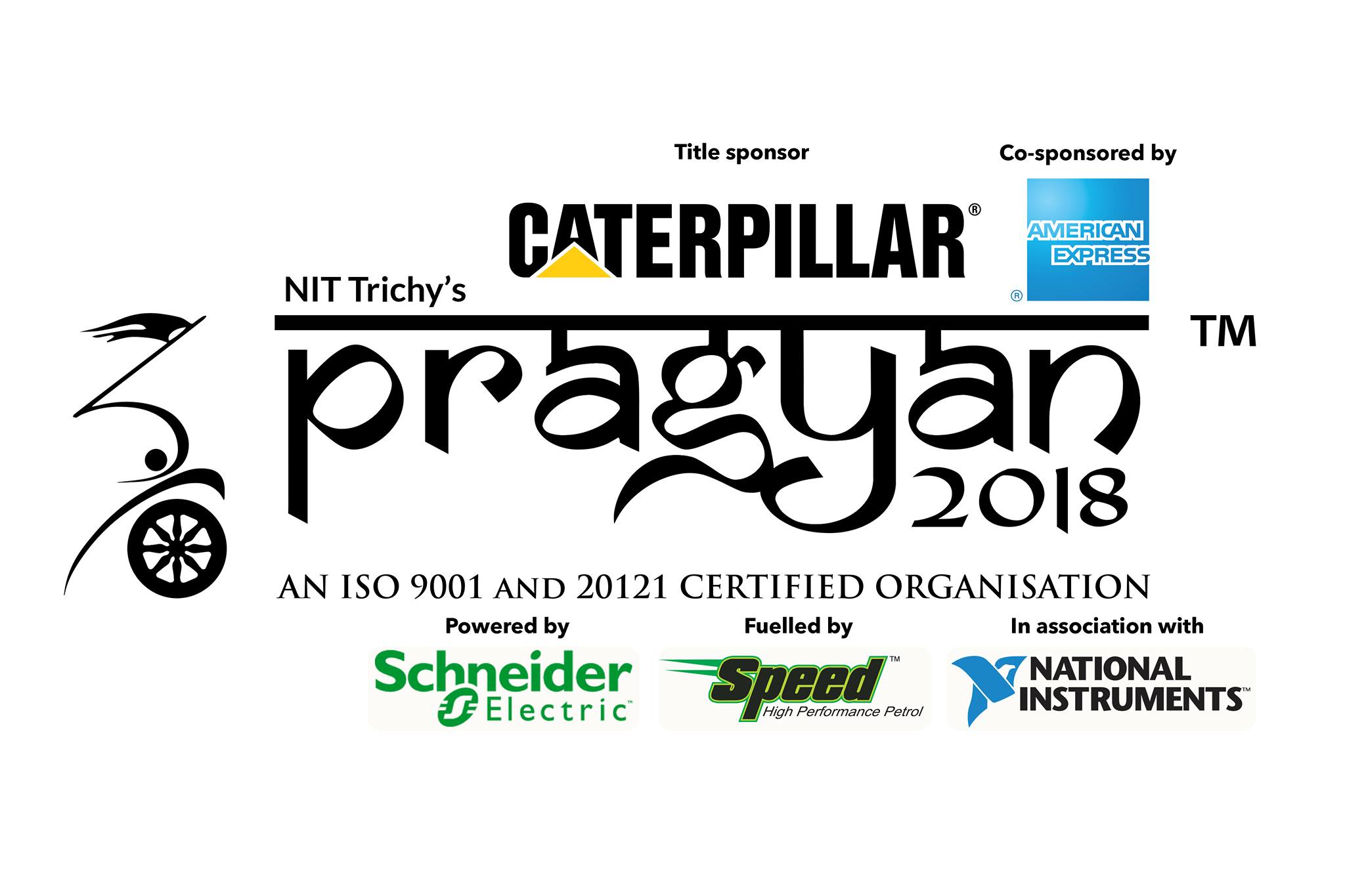 Pragyan, the ISO 9001 and 20121 certified international techno-managerial fest of NIT Trichy provides a platform for multitudes of students to showcase their technical prowess every year. Organising 40+ events sorted into different clusters, the fest covers a wide variety of technological and managerial aspects. With guest lectures and workshops spanning a wide variety of fields, the fest attracts students from various parts of the country every year. The 14th edition of Pragyan was sponsored by Caterpillar and was held between 1st to 4th March 2018. The theme for this edition was ‘The Next Dimension’.

Pragyan has expanded beyond the four days of the fest, celebrating technology through multiple outreach events and social responsibility events conducted throughout the year. Pragyan ‘18 commenced on March 1, 2018 with an inauguration ceremony held at the Barn Hall. Mr. Veerendra Vasamsetty, Innovation Manager, Schneider Electric (Research and Development wing) was the guest of honour for the event. Dr. B. N. Suresh, a renowned scientist and an aerospace engineer, was the Chief Guest for the occasion. The Chief Guest’s address delivered by him motivated many young students to take up and excel in their respective careers in engineering and technology.

To end the day on a cheerful note, an infotainment show presented by The Parchai Group, a Mumbai-based shadow dance troupe mesmerized the audience with their shadow art. Their performance was based on the silhouettes formed by their bodies on a huge screen, and the captivating ways in which their shadows danced together. The screen was soon set alight with the contrasting darkness, keeping the audience completely under their spell. After the spectacular beginning on Day 0, Day 1 of Pragyan 2018 commenced on 2nd March, with a series of exciting events, workshops, guest lectures, exhibitions and a lot more. Numerous events under different clusters were held on Day 1 of Pragyan like the NFS Aqua event under the Core E cluster, How Stuff works Quiz, Rush hour, Pragyan Design Challenge and a lot more. The GPU coding event was conducted in two stages, the first stage being a workshop dealing with the programming of a graphics card and the second stage being the coding competition.

The first Guest Lecture of Pragyan 2018 was by Dr. Casey Handmer, a levitation engineer at Hyperloop One. He touched upon various topics in his talk including space technology, Mars habitation and the use of machine learning to predict unrest in war torn regions by tracing fluctuations in market prices. This was followed by a Guest Lecture by Mrs. Meher Pudumjee, the chairperson of Thermax and an expert on energy and environment. The guest lecture was conducted as a question and answer session, where Mrs Meher was asked a set of questions and she answered them, while also skilfully blending in some useful and important ideas. The last Guest Lecture for the day was by Mr.. Ajay Bhatt, the computer architect, widely known as the co-inventor of the USB. Through his presentation titled ‘In Pursuit of Innovation’, he elaborated on current trends and opportunities relevant to the present scenario. His message to young innovators was that one only needed to look around oneself to innovate. He stated that creativity needs purpose and one should think big, start small and act now in order to succeed.

Day 1 concluded with an Infotainment show by the ventriloquist Shawn Chua and his puppet the Sensational Stefano. Through a creative and brilliant performance with lots of humour, he left the audience with lots of smiles and good memories. 3rd March, 2017, saw the Day 2 of Pragyan ‘17 with a wide range of events, designed to test the technical abilities of the participants. NITTRO – an RC car racing event, Pragyan Premier League – a managerial competition where each participant had to run their own cricket teams under simulated environments, Pragyan Biz Quiz – testing the business knowledge of participants, Hunt the code -a platform to exhibit skills in coding and Quad Combat – where participants waged war with their perfectly crafted Quadcopters against each other, are a few to name. Pragyan also organised a human library on Day 2 and Day 3 of Pragyan 2018.

The largest human library conducted by a student-run organisation, the human library consisted of 14 books from Human Library, Hyderabad, and was conducted in rooms 108 to 112 in the Lecture Hall Complex. The event witnessed many students flocking to the LHC to read books of varying genres from sections on LGBT rights, fighting body image stereotypes to sexual abuse. The wide range of titles available included, “Break the Silence on Child Sexual Abuse”, “The Sojourner”, “School, Sq.ft & Motorcycles – A Self-taught Architect”, “Being a Duck”, “Urdu speaking Brahmin”, “Closets are for Clothes”, “Overcoming Obesity”, “The Dancing Masculus”, “Self-Loathing Narcissist”, “The Price of Smiling”, “Young Politician”, “Postings and Pearls”, “Life in the Olive Green” and “Wonder Woman”. A number of Guest Lectures were held throughout the day. The first highlight of Day 2 was the Guest Lecture by Mr. Shivshankar Menon, former National Security Adviser of India. Talking about the various aspects concerning the security of India, Mr. Shivshankar Menon highlighted he various dimensions to the same by walking the audience through the changing scenario of security over the years. There was also a Guest Lecture by Dr. Kevin Grazier, an American planetary physicist known for his work on the Cassini/Huygens Mission to Saturn and Titan where he had the dual roles of Science Planning Engineer and Investigation Scientist for the Imaging Science Subsystem instrument.

Day 2 of Pragyan ’17 saw its only Crossfire event taking place. ‘Crossfire’ is an annual panel-discussion held during Pragyan every year which brings together the country’s best minds from diverse backgrounds to put forward their views on a common, socially-relevant topic. The topic for the Pragyan ‘18 Crossfire “Should we concede our privacy for greater good?” was well received by all panelists as well as the audience. The panelists for the session were: Reetika Khera, Associate Professor of Humanities. IIT Delhi, Anand Krishnan, Policy Maker, Data Security Council of India, Retd. Major General Sudhir Vombatkere, Cyber-law and security activist, Debabrata Nayak, Chief Technical Architect at Digilocker, and Shyam Divan, Senior Supreme Court Advocate. The discussion was moderated by Suhrith Parthasarathy, Advocate at Madras High Court. The discussion ensued for an hour, in which the panelists presented their thoughts on privacy infringement, especially with respect to the government encouraging linking of Aadhar IDs to bank accounts in recent days.

The night drew to a close with an infotainment performance by Shao the Manipulator. A master of bugeng – a combo of martial arts and illusion, his performance was a visual treat that left everyone spell-bound and wanting more.

The final leg of Pragyan ‘18, the third day of the fest took place on 4th March 2018. With another day packed with engaging guest lectures, exciting events and and events that are sure to exercise your grey cell, the first half of Day 3 has been a phenomenal experience for the participants.

The major highlights of the day are the three guest lectures covering a diverse range of topics. The first speaker was Dr. A. S. Ramasastri. Formerly the Chief General Manager-in-charge of the Department of Information Technology at Reserve Bank of India, Dr Ramasastri is currently the Director of the Institute for Development and Research in Banking Technology. He has spearheaded projects in the areas relevant to banking, like cyber security, analytics, cloud computing and payment systems, which have resulted in monumental growth of the Institute. The second Guest Lecture of the day was by Bhargavi Nuvvula, Vice President of American Express Technology, India. She spoke about the complexity of programming that goes behind implementing algorithms, and how things must be engineered to achieve artificial intelligence that can be compared to a human. The highlight of Day 3 was the Guest Lecture by Dr. Robert Metcalfe, the renowned electrical engineer credited as the co-founder of the Ethernet. He spoke at length about how he formulated the protocols for network file transfer TCP/IP, and his subsequent LAN wars with other competing corporations and their respective proprietary network protocols. Another insightful part of the talk revealed how he had already laid the groundwork for what would become modern WiFi by using Radio waves to transfer data. The story of how he founded 3com, his start-up, and its journey from a one-man company to the

world leader in networking was awe-inspiring.

The morning of Day 3 of Pragyan’ 17 witnessed a number of events conducting their final rounds, including Topographya, String Theory, Crime Busters, IOT Challenge and Marketing Hub to name a few.

Apart from this, the entirety of the fest saw a plethora of Workshops and Exhibitions. The workshops aimed at providing hands-on, practical training to the participants included C2000 Real Time Controller, conducted by Texas instruments teaching the basics of using the C2000 microcontroller, Artificial Intelligence Chatbots conducted by American Express, giving a practical and theoretical exposure to the bots, and a workshop on cyber security was organised by experts from Wipro to name a few.

Pragyan 18 showed a number of astounding exhibits that held visitors in awe, including Hyperloop India, a prototype built by Indian students in accordance with the standards of Hyperloop One, InMoov, a 3-D printed life-size robot, KalamSat, the world’s lightest satellite, an array of exhibits by the Liquid Propulsion Systems Centre of the Indian Space Research Organisation (ISRO), and Ugears, a collection of intricately crafted self-propelled mechanical models from Ukraine.

The Valediction ceremony of Pragyan ‘18 took place in the evening which was presided over by Mr. Vivekanand Vanmeeganathan, Managing Director, Caterpillar India as the Chief Guest. The winners of Sangam and Ingenium events, the flagship technical-exhibition contests held every year by Pragyan were felicitated.

The valediction ceremony was followed by a spectacular infotainment performance by the Mumbai-based mentalist and hypnotic artist Suhani Shah who left the audience spellbound with a wide array of mind-blowing tricks. The last infotainment show of Pragyan, the stand-up comedy show by Azeem Banatwalla enthralled the crowd and had them in splits for the entire hour. The laughter and smiles from the audience was a fitting conclusion to the eventful and
magnificent fest that Pragyan ‘18 was.