nmr is a powerful analytical technique to evaluate the structures of carbon compounds. The technique is used (i) to identify unknown compounds, (ii) to check for impurities and (iii) to study the shapes of molecules. In medicine, magnetic resonance imaging uses nmr to detect the hydrogen nuclei in the human body, especially in water and lipids. The term ‘nuclear’ interprets the technique that detects nuclei of atoms such as hydrogen-1 (proton). The term ‘magnetic’interprets the nuclei that act like tiny magnets that can line up either in the same direction or in the opposite direction to an external magnetic field. The term ‘resonance’is the absorption of energy in the form of radio waves with the frequency corresponding to the size of energy jump as the nuclei flip from one alignment in a magnetic field to the other (Fig. 24.11).

The atomic nuclei spin about their axes. Now since a rotating charged sphere is always associated with it a magnetic moment, then all the charged particles in a nucleus will make that nucleus to behave like a tiny bar magnet, with its magnetic moment along the axis of rotation of the nucleus. The angular momentum of the spinning nucleus can be represented in

terms of spin numbers (I). These numbers can attain the values

etc. (I = 0 denotes no spin). The nuclear magnetic moment is denoted by the symbol ‘µ’.

Each proton and neutron in a nucleus has its own spin and I is a resultant of these spins. If the sum of protons and neutrons is even, I is 0 or, integral (1, 2, etc.), if the sum is odd

Thus a proton (I = 1/2 ) can assume only one of the two possible orientations corresponding to the energy level of ±µH. 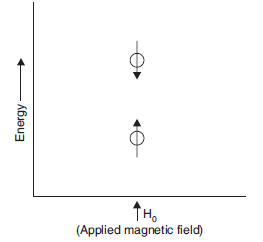 Fig1 Energy levels of a proton

The transition of a proton from one possible orientation to another is effected by the absorption or emission of a discrete amount of energy such that,

For protons if a magnetic field 14000 Gauss is applied the frequency of such energy remains in the radio frequency region (60 megacycles per second).

Unless the axis of the nuclear magnet is oriented exactly parallel or antiparallel with the applied magnetic field (Fig. 1), there will be a certain force by external magnetic field to so orient the spinning nucleus. But because the nucleus is spinning, the effect is that its rotational axis draws a circle perpendicular to the applied field. Such an effect is shown in Fig. 2. This motion of the nucleus is called Precession.