Magnetic Bearing:
The magnetic needle of the compass always points towards the magnetic north-south (N-S) direction indicating earth’s magnetic axis. Since this direction is same at all the places on the earth’s surface, it is universally used as the reference direction. The angle made by survey line in a clockwise direction with reference to magnetic N-S line is termed as magnetic bearing of the line. The value of magnetic bearing ranges from 0 o  to 360o .

Arbitrary Bearing:
It is the horizontal angle which a survey line makes with any arbitrary meridian, which is any convenient direction towards a permanent and prominent mark or signal, such as a church spire or top of a chimney. Such bearings are used to determine the relative position of line in a small area.

Whole Circle Bearing (WCB):
The complete circle of angular measurement starts with north as 0 o and ends at north at 360o . The bearing of line directly obtained by magnetic needle ranging from 0 o to 360 o is called whole circle bearing .

Reduced Bearing (RB):
The more convenient way to comprehend the direction of a survey line is to represent the bearing on a quadrantal system. The angle is measured with respect to N–S line towards east or west as shown in Figure 3.1(b). The relationship between WCB and RB is shown in Figure 3.1(c).

Fore Bearing (FB):
The angle measured in the direction of survey line from starting survey station to the next station is called fore bearing. In Figure 3.1(d), if the bearing of line AB is measured from A towards B, it is known as forward bearing or fore bearing.

Back Bearing (BB):
It is the bearing of the survey line taken from the forward survey station to the preceding station from which the fore bearing was taken earlier. In Figure , if the bearing of same line AB is measured from B towards A, it is known as backward bearing or back bearing.

(c) Relationship between WCB and RB 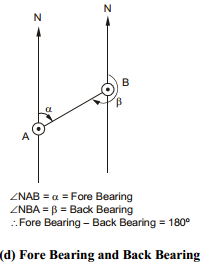 Bearing of a Survey Line