Common practice of design and construction is to support the slabs by beams and support the beams by columns. This may be called as beam-slab construction. The beams reduce the available net clear ceiling height. Hence in warehouses, offices and public halls some times beams are avoided and slabs are directly supported by columns. This types of construction is aesthetically appealing also. These slabs which are directly supported by columns are called Flat Slabs.

The column head is some times widened so as to reduce the punching shear in the slab. The widened portions are called column heads. The column heads may be provided with any angle from the consideration of architecture but for the design, concrete in the portion at 45º on either side of vertical only is considered as effective for the design

The portion of flat slab that is bound on each of its four sides by centre lines of adjacent columns is called a panel. The panel shown in Fig. 1.5 has size L1  L2. A panel may be divided into column strips and middle strips. Column Strip means a design strip having a width of 0.25L1 or 0.25L2, whichever is less. The remaining middle portion which is bound by the column strips is called middle strip. Fig. 5 shows the division of flat slab panel into column and middle strips in the direction y. 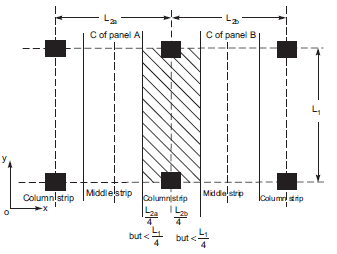