A footing supporting more than a single column or wall is called a combined footing, and when many columns (more than two) are involved, terms such as continuous strip footing (if columns are aligned in one direction only) and raft foundation or mat foundation are used. Multiple column foundations become necessary in soils having very low bearing capacities. However, even in soils having moderate or high ‘safe bearing capacity’ for the use of individual footings, combined footings become necessary sometimes — as when:

The prediction of the exact distribution of base pressure under a footing is difficult, as it depends on the rigidity of the footing as well as the properties of the soil. If this is difficult for an isolated footing, indeed, it is more so for a combined footing.
For a very rigid footing supported on an elastic soil base, a straight line pressure distribution is appropriate. Such an assumption is found to lead to satisfactory designs in the case of relatively rigid footings. However, for relatively flexible footings, such an assumption is not realistic; the problem is rather complex and involves consideration of soil-structure interaction.

1. Base area of footing A = Total (service) load/qa.
2. The line of action of the resultant of the column loads must pass through the centroid of the footing.

In the case of a rectangular footing, the second requirement results in a length L of the footing equal to

. The edge distance a may be fixed with reference to a property line; otherwise, it may be suitably assumed. Having fixed L, the footing width B is obtained as A/L. In the case of a trapezoidal footing usually the length L is selected first, and the dimensions B1, B2 adjusted to satisfy the two requirements cited above.

As in the case of isolated footings, the factored net soil pressure qu is computed as the resultant factored load divided by the base area provided, and the pressure may be assumed to be uniformly distributed 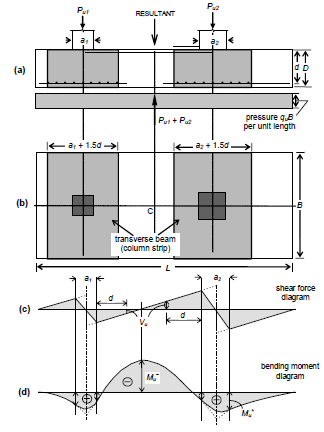