In a typical structure built on ground, that part of the structure which is located above ground is generally referred to as the superstructure, and the part which lies below ground is referred to as the substructure or the ‘foundation structure’ (or simply, foundation). The purpose of the foundation is to effectively support the superstructure by
1 transmitting the applied load effects (reactions in the form of vertical and horizontal forces and moments) to the soil below, without exceeding the ‘safe bearing capacity’ of the soil, and
2 ensuring that the settlement of the structure is within tolerable limits, and as nearly uniform as possible.

Further, the foundation should provide adequate safety against possible instability due to overturning or sliding and/or possible pullout. The choice of the type of foundation depends not only on the type of the superstructure and the magnitudes and types of reactions induced at the base of the superstructure, but also on the nature of the soil strata on top of which the substructure is to be founded.

The Code recommendations (Cl. 34) are confined to the design of footings that support isolated columns or walls and rest directly on soil or on a group of piles

• the loads on the columns (axial thrust, bending moments‡) are resisted by concrete under compression and reinforcing steel under tension and/or compression, whereas these load effects are transmitted by the footing/raft to a relatively weak supporting soil by bearing pressures alone;

Isolated Footings
For ordinary structures located on reasonably firm soil, it usually suffices to provide a separate footing for every column. Such a footing is called an isolated footing. It is generally square or rectangular in plan; other shapes are resorted to under special circumstances. The footing basically comprises a thick slab which may be flat (of uniform thickness), stepped or sloped (on the upper surface).

The soil bearing pressures from below tend to make the base slab of the footing bend upwards, somewhat into a saucer-like shape (cantilever action), and hence the footing needs to be suitably reinforced by a mesh provided at the bottom of the slab. 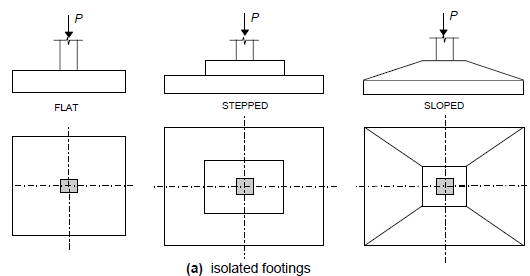 In some cases it may be inconvenient to provide separate isolated footings for columns (or walls) on account of inadequate areas available in plan. This may occur when two or more columns (or walls) are located close to each other and/or if they are relatively heavily loaded and/or rest on soil with low safe bearing capacity, resulting in an overlap of areas if isolated footings are attempted.
In such cases, it is advantageous to provide a single combined footing for the columns. Often, the term ‘combined footing’ is used when two columns are supported by a common footing, the term ‘continuous strip footing’ is used if the columns (three or more in number) are aligned in one direction alone, and the term ‘raft foundation’ (‘mat foundation’) is used when there is a grid of multiple columns. The combining of footings contributes to improved integral behaviour of the structure.