Retaining walls and their types

Retaining walls are used to retain earth (or other material) in a vertical (or nearly vertical) position at locations where an abrupt change in ground level occurs. The wall, therefore, prevents the retained earth from assuming its natural angle of repose. This causes the retained earth to exert a lateral pressure on the wall, thereby tending to bend, overturn and slide the retaining wall structure. The wall, including its supporting footing, must therefore be suitably designed to be stable under the effects of the lateral earth pressure, and also to satisfy the usual requirements of strength and serviceability.

The ‘gravity wall’ provides stability by virtue of its own weight, and therefore, is rather massive in size. It is usually built in stone masonry, and occasionally in plain concrete. The thickness of the wall is also governed by the need to eliminate or limit the resulting tensile stress to its permissible limit (which is very low in the case of concrete and masonry). Plain concrete gravity walls are not used for heights exceeding about 3 m, for obvious economic reasons.

For large heights, in a cantilever retaining wall, the bending moments developed in the stem, heel slab and toe slab become very large and require large thicknesses. The bending moments (and hence stem/slab thicknesses) can be considerably reduced by introducing transverse supports, called counterforts, spaced at regular intervals of about one-third to one-half of the wall height), interconnecting the stem‡ with the heel slab. The counterforts are concealed within the retained earth (on the rear side of the wall). Such a retaining wall structure is called the counterfort wall, and is economical for heights above (approx.) 7 m. The counterforts subdivide the vertical slab (stem) into rectangular panels and support them on two sides (suspender-style), and themselves behave essentially as vertical cantilever beams of T-section and varying depth. The stem and heel slab panels between the counterforts are now effectively ‘fixed’ on three sides (free at one edge), and for the stem the predominant direction of bending (and flexural reinforcement) is now horizontal (spanning between counterforts), rather than vertical (as in the cantilever wall).

The ‘buttress wall’ is similar to the ‘counterfort wall’, except that the transverse stem supports, called buttresses, are located in the front side, interconnecting the stem with the toe slab (and not with the heel slab, as with counterforts). Although buttresses are structurally more efficient (and more economical) than counterforts, the counterfort wall is generally preferred to the buttress wall as it provides free usable space (and better aesthetics) in front of the wall.

5. Other Types of Walls

Retaining walls often form part of a bigger structure, in which case their structural behaviour depends on their interaction with the rest of the structure. the vertical stem is provided an additional horizontal restraint at the top, due to the slab† at the ground floor level (in the case of the basement wall) and due to the bridge deck (in the case of bridge abutment). The stem is accordingly designed as a beam, fixed at the base and simply supported or partially restrained at the top. The side walls of box culverts also act as retaining walls. In this case, the box culvert (with single/multiple cells) acts as a closed rigid frame, resisting the combined effects of lateral earth pressures, dead loads (due to self weight and earth above), as well as live loads due to highway traffic. 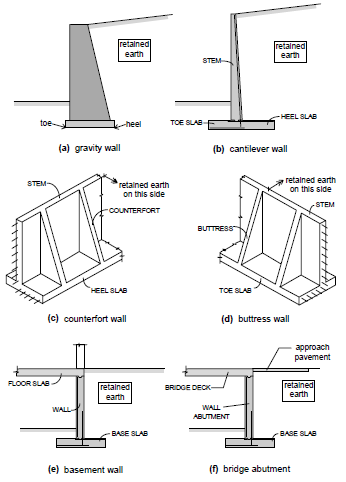