These tanks may be rectangular or circular. The tanks are supported on staging which consists of masonry tower or a number of columns braced together. The tank walls are designed in the same way as the walls of tanks resting on the ground. The base slab of circular tanks is designed as circular slab supported on masonry or circular beam at the end. The slab of rectangular tanks is designed as two-way slab if length is less than twice the breadth the slab is designed as one-way slab. The base slab is subjected to bending moment at the end to direct tension, caused by the water pressure acting on vertical walls.

The staging consists of a number of columns braced together at intervals. The columns are assumed to be fixed at the braces as well as to elevated tank, therefore, effective length of column is taken as distance between bracings.
The wind force acting on the tank and staging produces tension on the windward side columns and compression on the leeward side columns. The force in any column is proportional to its distance from C.G. of the column group.

In the design it is assumed that horizontal shear taken by inner columns is twice that taken by outer columns. The bracings are designed for B.M. and shear. Same reinforcement is put at top and bottom as the may blow from one side or the other.
Circular tanks are sometimes provided with inclined columns. In such cases the vertical component of the force to each column is found as given above. The horizontal shear in each column is given by deducting the sum of horizontal components of the forces in the columns from the wind force and dividing by number of columns.

Let O be the column and OA and OB be the braces meeting at column O. Oa is drawn perpendicular to OA and OB is drawn perpendicular to OB and ab is drawn at right angles to the direction of wind, ab gives moment in the column Oa and Ob will give the moments in braces OA and OB respectively. For moment to be maximum in OA, the wind should blow at right angles to the other brace OB. In such a case triangle of moments will be right angled triangle and side Oa will be hypotenuse. 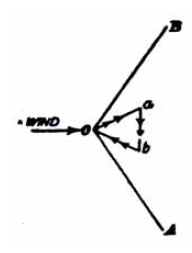