The idea of prestressed concrete has been around since the latter decades of the 19th century, but its use was limited by the quality of the materials at the time. It took until the 1920s and ‘30s for its materials development to progress to a level where prestressed concrete could be used with confidence. Freyssinet in France, Magnel in Belgium and Hoyer in Germany were the principle developers.

The idea of prestressing has also been applied to many other forms, such as:
• Wagon wheels;
• Riveting;
• Barrels, i.e. the coopers trade;

Concrete is very strong in compression but weak in tension. In an ordinary concrete beam the tensile stress at the bottom are taken by standard steel reinforcement: But we still get cracking, which is due to both bending and shear:

In prestressed concrete, because the prestressing keeps the concrete in compression, no cracking occurs. This is often preferable where durability is a concern.

The main advantages of prestressed concrete (PSC) are:

The main factors for concrete used in PSC are:
• Ordinary portland cement-based concrete is used but strength usually greater than 50 N/mm2;
• A high early strength is required to enable quicker application of prestress;
• A larger elastic modulus is needed to reduce the shortening of the member;
• A mix that reduces creep of the concrete to minimize losses of prestress;

Steel
The steel used for prestressing has a nominal yield strength of between 1550 to 1800 N/mm2. The different forms the steel may take are:

• Wires: individually drawn wires of 7 mm diameter;
• Strands: a collection of wires (usually 7) wound together and thus having a diameter that is different to its area;
• Tendon: A collection of strands encased in a duct – only used in posttensioning;
• Bar: a specially formed bar of high strength steel of greater than 20 mm diameter.

Prestressed concrete bridge beams typically use 15.7 mm diameter (but with an area of 150 mm2)7-wire super strand which has a breaking load of 265 kN. 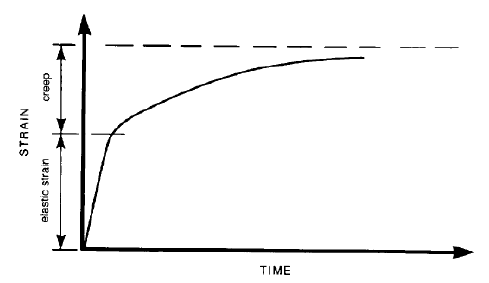