Introduction: SUBSURFACE WATER Water beneath the land surface occurs in two principal zones, the unsaturated zone and the saturated zone (Figure A–1).

In the unsaturated zone, the voids—that is, the spaces between grains of gravel, sand, silt, clay, and cracks within rocks—contain both air and water. Although a considerable amount of water can be present in the unsaturated zone, this water cannot be pumped by wells because it is held too tightly by capillary forces. The upper part of the unsaturated zone is the soil-water zone. The soil zone is crisscrossed by roots, voids left by decayed roots and animal and worm burrows, which enhance the infiltration of precipitation into the soil zone. Soil water is used by plants in life functions and transpiration, but it also can evaporate directly to the atmosphere. 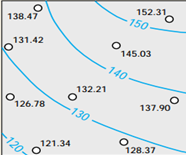