Introduction: As the Nation’s concerns over water resources and the environment increase, the importance of considering ground water and surface water as a single resource has become increasingly evident. Issues related to water supply, water quality, and degradation of aquatic environments is reported on frequently. The interaction of ground water and surface water has been shown to be a significant concern in many of these issues. For example, contaminated aquifers that discharge to streams can result in long-term contamination of surface water; conversely, streams can be a major source of contamination to aquifers.

Surface water commonly is hydraulically connected to ground water, but the interactions are difficult to observe and measure and commonly have been ignored in water-management considerations and policies. Many natural processes and human activities affect the interactions of ground water and surface water. The purpose of this report is to present our current understanding of these processes and activities as well as limitations in our knowledge and ability to characterize them.

The Hydrologic Cycle and Interactions of Ground Water and Surface Water: The hydrologic cycle describes the continuous movement of water above, on, and below the surface of the Earth. The water on the Earth’s surface—surface water—occurs as streams, lakes, and wetlands, as well as bays and oceans. Surface water also includes the solid forms of water— snow and ice. The water below the surface of the Earth primarily is ground water, but it also includes soil water. 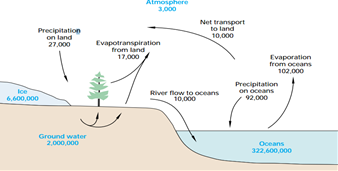 The hydrologic cycle commonly is portrayed by a very simplified diagram that shows only major transfers of water between continents and oceans, as in Figure 1. However, for understanding hydrologic processes and managing water resources, the hydrologic cycle needs to be viewed at a wide range of scales and as having a great deal of variability in time and space. Precipitation, which is the source of virtually all freshwater in the hydrologic cycle, falls nearly everywhere, but its distribution, is highly variable. Similarly, evaporation and transpiration return water to the atmosphere nearly everywhere, but evaporation and transpiration rates vary considerably according to climatic conditions.

Figure1:Ground water is the second smallest of the four main pools of water on Earth, and river flow to the oceans is one of the smallest fluxes, yet ground

water and surface water are the components of the hydrologic system that humans use most.(ModifiedfromSchelesinger,W.H.,1991,BiogeochemisryAn analysis of global change: Academic Press, San Diego, California.) (Used with permission.)

To present the concepts and many facets of the interaction of ground water and surface water in a unified way, a conceptual landscape is used.

Figure2: Ground water and surface water interact throughout all landscapes from the mountains to the oceans, as depicted in this diagram of a conceptual

landscape. M, mountainous; K, karst; G, glacial;  R, riverine (small); V, riverine (large); C, coastal.5 Small-scale geologic features in beds of  surface-water bodies affect seepage patterns at scales too small to be shown in Figure 3. For example, the size, shape, and orientation of the sediment grains in surface-water beds affect seepage patterns. If a surface-water bed consists of one sediment type, such as sand, inflow seepage is greatest at the shoreline, and it decreases in a nonlinear pattern away from the shore line. Geologic units having different permeability’s also affect seepage distribution in surface water beds. For example, a highly permeable sand layer within a surface-water bed consisting largely of silt will transmit water preferentially into the surface water as a spring.

Figure 3:  Ground-water seepage into surface water usually is greatest near shore. In flow diagrams such as that shown here, the quantity of discharge is equal between any two flow lines; therefore, the closer flow lines indicate greater discharge per unit of bottom area.