Introduction: The ground-water system as a whole is actually a three-dimensional flow field; therefore, it is important to understand how the vertical components of ground-water movement affect the interaction of ground water and surface water. A vertical section of a flow field indicates how potential energy is distributed beneath the water table in the ground-water system and how the energy distribution can be used to determine vertical components of flow near a surface-water body. The term hydraulic head, which is the sum of elevation and water pressure divided by the weight density of water, is used to describe potential energy in ground-water flow systems. 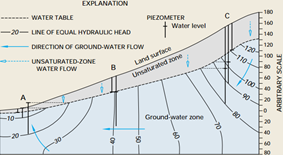 For example, Figure:shows a generalized vertical section of subsurface water flow. Water that infiltrates at land surface moves vertically downward to the water table to become ground water. The ground water then moves both vertically and laterally within the ground-water system. Movement is downward and lateral on the right side of the diagram, mostly lateral in the center, and lateral and upward on the left side of the diagram.

Flow fields such as these can be mapped in a process similar to preparing water-table maps, except that vertically distributed piezometers need to be used instead of water-table wells. A piezometer is a well that has a very short screen so the water level represents hydraulic head in only a very small part of the ground-water system. A group of piezometers completed at different depths at the same location is referred to as a piezometer nest. Three such piezometer nests are shown in Figure A–3 (locations A, B, and C). By starting at a Water-table contour and using the water-level data from the piezometer nests, lines of equal hydraulic head can be drawn. Similar to drawing flow direction on water-table maps, flow lines can be drawn approximately perpendicular to these lines of equal hydraulic head. Actual flow fields generally are much more complex than that shown in Figure.

GROUND-WATER DISCHARGE: The quantity of ground-water discharge (flux) to and from surface-water bodies can be determined for a known cross section of aquifer by multiplying the hydraulic gradient, which is determined from the hydraulic-head measurements in wells and piezometers, by the permeability of the aquifer materials. Permeability is a quantitative measure of the ease of water movement through aquifer materials. For example, sand is more permeable than clay because the pore spaces between sand grains are larger than pore spaces between clay particles.

Changing meteorological conditions also strongly affect seepage patterns in surface-water beds, especially near the shoreline. The water table commonly intersects land surface at the shoreline, resulting in no unsaturated zone at this point. Infiltrating precipitation passes rapidly through a thin unsaturated zone adjacent to the shoreline, which causes water-table mounds to form quickly adjacent to the surface water. This process, termed focused recharge, can result in increased ground-water inflow to surface-water bodies, or it can cause inflow to surface-water bodies that normally have seepage to ground water. Each precipitation event has the potential to cause this highly transient flow condition near shorelines as well as at depressions in uplands.

Transpiration by near shore plants has the opposite effect of focused recharge. Again, because the water table is near land surface at edges of surface-water bodies, plant roots can penetrate into the saturated zone, allowing the plants to transpire water directly from the groundwater system. Transpiration of ground water commonly results in a drawdown of the water table much like the effect of a pumped well. This highly variable daily and seasonal transpiration of ground water may significantly reduce ground-water discharge to a surface-water body or even cause movement of surface water into the subsurface. In many places it is possible to measure diurnal changes in the direction of flow during seasons of active plant growth; that is, ground water moves into the surface water during the night, and surface water moves into shallow ground water during the day.