Introduction:  Around 83% of the solid biomass consumed in Europe is dedicated to heat production and only 17% to power generation. However, the latter is expanding rapidly, primarily in Northern Europe, North America and Brazil owing to favorable policies and abundant resources (IEA Bioenergy, 2002; Van Loo and Koppejan, 2008; Eurobserver, 2010). Due to the low energy density and high transportation costs of biomass fuel, dedicated biomass power plants are usually smaller (5-25 MWe) than those using conventional fossil fuels, resulting in lower energy conversion efficiencies (typically between 20-25% depending on plant size and technology) and higher investment costs (2000-4000€/kW).

As a result, the production of electricity from biomass remains expensive in most cases and highly dependent on public subsidies (Babcock and Lenzen, 2010; San Miguel et al., 2010). Electricity costs have been calculated to range between US$20/MHz for the co-firing of a locally available charge-free biomass feedstock to a more realistic $30-$50/MHz for medium size (10-25 MWe) dedicated power plants using conventional biomass at a standard cost of US$3-US$3.5/GJ (Caputo et al., 2005). This compares unfavorably with electricity generation costs calculated for more conventional energy sources like hydroelectric power (15 US$/MHz), natural gas in a combined cycle (25 US$/MHz), coal (26 US$/MHz) and nuclear (16 US$/MHz) (CNE, 2008). At present, biomass only accounts for 1.3% of the electricity generated in the world, 3.7% in the European Union and 3.4% in the USA (IEA Bioenergy, 2010; EIA, 2009). 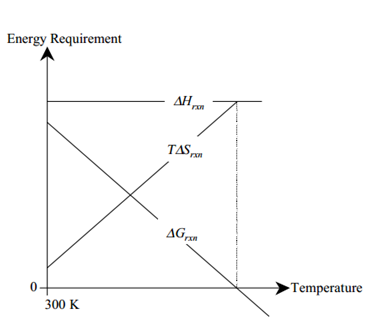 THERMODYNAMICS OF SOLAR THERMOCHEMICAL CONVERSION: Because thermodynamics is the science thatdescribes the conversion of one form of energy into another form, it is germane to the field of Solar Thermochemistry. Solar thermochemical processesconvert radiant energy into chemical energy. Thetwo fundamental thermodynamic laws that givepractical information with regard to any solarthermochemical process are the 1stand 2ndlaws.Using the 1stlaw, one establishes the minimumamount of solar energy required to produce aparticular fuel or chemical species. The 2NDlawindicates, among other things, whether or not thechosen path for producing the fuel is physically possible. Both types of information are required for a process designer.  We consider as an example a generic solar process in which one wishes to affect the following chemical. Variations of DHrxn, DGrxn, and TDSrxn with temperature for a generic solar chemical reaction.  DHrxn is the total energy required to effect the transformation. DGrxn is the portion of energy that must be supplied as high-quality energy in the form of work, for example, in the form of electrical work. The remainder TDSrxn is the amount of energy that can be supplied as process heat for the completely reversible process in the form of solar thermal energy.

History: This concept was first postulated by Funk and Reinstrom (1966) as a reflexion about the most efficient way to produce fuels (e.g. hydrogen, ammonia) from stable and abundant species (e.g. water, nitrogen) and heat sources . Although fuel availability was scarcely considered before the oil crisis era, these researches were justified by niche markets. As an example, in the military logistics field, providing fuels for vehicles in remote battlefields is a key task. Hence, a mobile production system based on a portable heat source (a specific nuclear reactor was strikingly considered) was being investigated with the uttermost interest. Following the crisis, many programs (Europe,Japan,USA) were set up to design, test and qualify such processes for more peaceful purposes such as energy independence. High temperature (1000K) nuclear reactors were still considered as the heat sources. However, the optimistic expectations of the first thermodynamics studies were quickly moderated by more pragmatic analysis based on fair comparisons with standard technologies (thermodynamic cycles for electricity generation, coupled with the electrolysis of water) and by numerous practical issues (not high enough temperatures with nuclear reactors, slow reactivities, reactor corrosion, significant losses of intermediate compounds with time...) . Hence, the interest for this technology was fading away during the next decades, or at least some tradeoffs (hybrid versions) were being considered with the use of electricity as a fractional energy input instead of only heat for the reactions (e.g. Hybrid sulfur cycle). A rebirth in the year 2000 can be explained by both new energy crisis and the rapid pace of development of concentrated solar power technologies whose potentially very high temperatures are ideal for thermochemical processes , while the environmentally friendly side of these researches attracts funding in a period with the peak oil shadow.

Examples:Hundreds of such cycles have been proposed and investigated. This task has been eased by the availability of computers, allowing a systematic screening of chemical reactions sequences based on thermodynamic databases . Only the main "families" will be described in this article.