Introduction: It is true that a nutrient cycle (or ecological recycling) is the movement and exchange of organic and inorganic matter back into the production of living matter. The process is regulated by food web pathways that decompose matter into mineral nutrients. Nutrient cycles occur within ecosystems. Ecosystems are interconnected systems where matter and energy flows and is exchanged as organisms feed, digest, and migrate about. Minerals and nutrients accumulate in varied densities and uneven configurations across the planet. Ecosystems recycle locally, converting mineral nutrients into the production of biomass, and on a larger scale they participate in a global system of inputs and outputs where matter is exchanged and transported through a larger system of biogeochemical cycles

Gaseous cycle:Those elements in which the reservoir is the air or the oceans (via evaporation). Gaseous cycles include those of Carbon, Nitrogen, Oxygen, Carbon, and Water.

Sedimentary cycle: Those elements which are received from the Earth’s crust.  Sedimentary cycles include those of iron, calcium, phosphorus, and other more earth bound elements.

NITROGEN CYCLE: Nitrogen is crucial for all organisms; 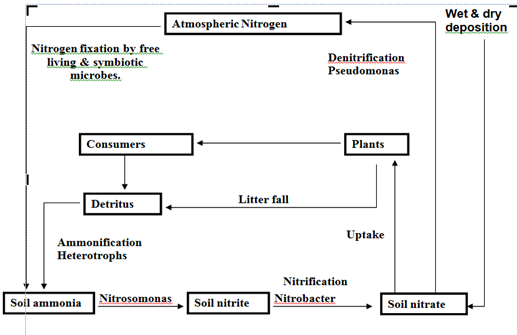 2) Nitrification: Conversion of NH3 → NO3

Roots absorb NH3, NH4, or NO3 and incorporate them into nucleic acids and protein.

The reduction of NO3 to N2 .Denitrifying bacteria return some of the nitrogen to the atmosphere.

Complete and closed loop:  Ecosystems are capable of complete recycling. Complete recycling means that 100% of the waste material can be reconstituted indefinitely. This idea was captured by Howard T. Odum when he penned that "it is thoroughly demonstrated by ecological systems and geological systems that all the chemical elements and many organic substances can be accumulated by living systems from background crustal or oceanic concentrations without limit as to concentration so long as there is available solar or other source of potential energy" In 1979 Nicholas Georgescu-Roegen proposed a fourth law of entropy stating that complete recycling is impossible. Despite Georgescu-Roegen's extensive intellectual contributions to the science of ecological economics, the fourth law has been rejected in line with observations of ecological recycling.

Ecological recycling:  An example of ecological recycling occurs in the enzymatic digestion of cellulose. "Cellulose, one of the most abundant organic compounds on Earth, is the major polysaccharide in plants where it is part of the cell walls. Cellulose-degrading enzymes participate in the natural, ecological recycling of plant material."Different ecosystems can vary in their recycling rates of litter, which creates a complex feedback on factors such as the competitive dominance of certain plant species. Different rates and patterns of ecological recycling leaves a legacy of environmental effects with implications for the future evolution of ecosystems.

Ecological recycling is common in organic farming, where nutrient management is fundamentally different compared to agri-business styles of soil management. Organic farms that employ ecosystem recycling to a greater extent support more species (increased levels of biodiversity) and have a different food web structure. Organic agricultural ecosystems rely on the services of biodiversity for the recycling of nutrients through soils instead of relying on the supplementation of synthetic fertilizers.The model for ecological recycling agriculture adheres to the following principals:

Ecosystem engineers: The persistent legacy of environmental feedback that is left behind by or as an extension of the ecological actions of organisms is known as niche construction or ecosystem engineering. Many species leave an effect even after their death, such as coral skeletons or the extensive habitat modifications to a wetland by a beaver, whose components are recycled and re-used by descendants and other species living under a different selective regime through the feedback and agency of these legacy effects.Ecosystem engineers can influence nutrient cycling efficiency rates through their actions.

Earthworms, for example, passively and mechanically alter the nature of soil environments. Bodies of dead worms passively contribute mineral nutrients to the soil. The worms also mechanically modify the physical structure of the soil as they crawl about (bioturbation), digest on the moulds of organic matter they pull from the soil litter. These activities transport nutrients into the mineral layers of soil. Worms discard wastes that create worm castings containing undigested materials where bacteria and other decomposers gain access to the nutrients. The earthworm is employed in this process and the production of the ecosystem depends on their capability to create feedback loops in the recycling process.