Introduction:  Oceans cover more than 70% of Earth's surface, making them the world's largest solar collectors. The sun's heat warms the surface water a lot more than the deep ocean water, and this temperature difference creates thermal energy. Just a small portion of the heat trapped in the ocean could power the world. Workers install equipment for an ocean thermal energy conversion experiment in 1994 at Hawaii's Natural Energy Laboratory. Credit: A. Resnick, Makai  Ocean Engineering, Inc.

Ocean thermal energy is used for many applications, including electricity generation. There are three types of electricity conversion systems: closed-cycle, open-cycle, and hybrid. Closed-cycle systems use the ocean's warm surface water to vaporize a working fluid, which has a low-boiling point, such as ammonia. The vapor expands and turns a turbine. The turbine then activates a generator to produce electricity. Open-cycle systems actually boil the seawater by operating at low pressures. This produces steam that passes through a turbine/generator. And hybrid systems combine both closed-cycle and open-cycle systems.

It can be generated by following ways: 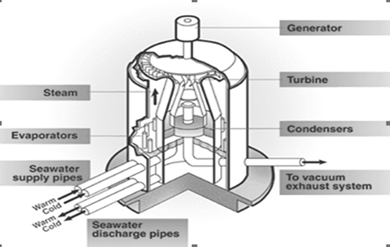 Thermal energy is the part of the total internal energy of a thermodynamic system or sample of matter that results in the system temperature. This quantity may be difficult to determine or even meaningless unless the system has attained its temperature only through cooling, and not been subjected to work input or output, or any other energy-changing processes.

The internal energy of a system, also often called the thermodynamic energy, includes other forms of energy in a thermodynamic system in addition to thermal energy, namely forms of potential energy that do not influence temperature, such as the chemical energy stored in its molecular structure and electronic configuration, intermolecular interactions associated with phase changes that do not influence temperature (i.e., latent energy), and the nuclear binding energy that binds the sub-atomic particles of matter.

The temperature difference should be of 200C or more is required between surface water and deeper water.

1. Temperature of the earth increases at a rate of 20-750C per km, when we move down the earth surface.

2. High temperature and high pressure steam fields exists below the earth’s surface in many places.

3. The energy harnessed from the high temperature present inside the earth is called geothermal energy.