Introduction:  These molecules are subsequently transformed into other biomass constituents (fats, proteins and carbohydrates) through different metabolic routes and passed around to other organisms through the food chain (Stassen et al., 1999). Biomass is currently the largest source of renewable energy in the world and a continuous expansion is expected in the following years in order to comply with existing programs aimed at reducing the consumption of fossil fuels (EIA, 2010; IEA, 2009; Eurobserver, 2010). The combustion of biomass and its derivates is regarded as low carbon activity because the CO2 emitted into the atmosphere has been recently captured by the plants through photosynthesis. Substitution of fossil fuels with locally generated biomass provides additional benefits in the form of energy security, improved trade balances, opportunities for economic and social development in rural communities and the possibility of reducing waste disposal problems (Stern, 2006; IEA Bioenergy, 2010).

Although any organic material can be subjected to fast pyrolysis, this technology was developed primarily for the conversion of lignocellulose biomass. Wood parts, shavings, sawdust and tree bark produced as by-products of forest management, wood processing and agricultural activities are the most common feedstock’s for fast pyrolysis processes. Other abundant types of residual lignocellulose materials with the potential to be subjected to fast pyrolysis include sugarcane and sorghum bagasse, corn and cotton stalks, rice hulls, cereal straws, peanut and oat hulls, organic fibers from the pulp and paper industry, nut shells and fruit stones (Mohan et al., 2006). Residual lignocellulose biomass is being increasingly demanded for various energy and non-energy applications, resulting in reduced availability and higher market prices. In addition, due to their residual nature, they tend to be subjected to changes in quality and supply. Hence, dedicated energy crops like short-rotation coppice (eucalyptus, poplar, willow) and grasses (miscanthus, switch grass) are increasingly being considered a means of producing large amounts of lignocellulose biomass in a more controlled environment. Intensive energy crops need to be adequately managed in order to minimize other adverse effects on local biodiversity and land use (Berndes et al., 2003; Bassam, 2010).

However, not all lignocellulose materials are the same. Hard woods, soft woods, herbaceous plants and other biomass feedstock’s differ largely in their chemical composition and physical characteristics, which have a notable effect on their thermal behavior. The main differences relate to the proportion and exact characteristics of the polymeric components (lignin, cellulose and hemicellulose), water content and the presence of additional organic compounds (resins, fats, sugars and other extractives), and inorganic elements (ash) (Salisbury et al., 1992). These features have a notable effect on the pyrolysis behavior of the feedstock, affecting the yield and characteristics of the final products (Oasmaa et al., 2003) Yang et al., 2007; Livingston, 2007; Fahmi et al., 2008; Guo et al., 2010). Hence, adequate selection and conditioning of the biomass feedstock has to be regarded as an essential part of the fast pyrolysis process.

Pyrolysis: Pyrolysis is thermal degradation, either in the complete absence of an oxidizing agent, or with such a limited supply of it that gasification does not occur to an appreciable extent (partial gasification). Relatively low temperatures are employed, 500-800 oC, compared to 800-1100oC in gasification. Three products are usually produced - gas, liquid and char, the relative proportions of  which depend very much on the pyrolysis method and reaction parameters. Pyrolysis has received attention recently for the production of liquid fuels from cellulosic feed-stocks by “fast” and “flash” pyrolyses in which the biomass has a short residence time in the reactor. A deeper understanding of the physical and chemical properties governing pyrolytic reactions has allowed the optimization of reactor conditions necessary for these types of pyrolysis. Work now focuses on the use of highpressure reactor conditions to produce hydrogen and on low pressure catalytic techniques (requiring zeolites) for alcohol production from pyrolytic oil. 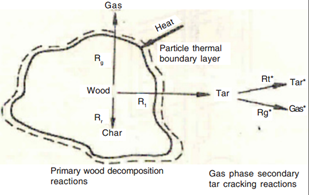 Principle of pyrolysis: Biomass consists of three major components - cellulose, hemi-cellulose and lignin. Cellulose is a straight and stiff molecule with a polymerization degree of approximately 10.000 glucose unit (C6 sugar). Hemicellulose are polymers built C5, C6 sugars with a polymerization degree of about 200 sugar units. Both cellulose and hemicellulose can be vapoured with negligible char  formation at temperatures above 500 o C. Lignin is a three-dimensional branched polymer composed of phenolic units. Due to the aromatic content of lignin, it degrades slowly on heating and contributes to a major fraction of the char formation. In addition to the major cell wall composition, like cellulose, hemicellulose and lignin, biomass often contains varying amounts of species called “extractives”, which are soluble in polar or non-polar solvents, and consist of terpenes, fatty acids, aromatic compounds and volatile oil. Heat is first transported to the surfaceof the particle by conduction. A heated volumetric element within the biomass particle subsequently decomposes into char and vapour fragments, which consist of condensable gases (bio-oil) and non-condensable gases. Due to the volumetric vapour production, pressure is built up inside the porous particle which is at a maximum at the particle centre and decreases towards the particle surface. Vapours formed inside the biomass pores are subject to further cracking, which leads to the formation of char, gases and thermally stable tars. The long residence time of the vapours inside large particles at low pyrolysis temperatures explains the formation of charcoal in the case. However this mechanism is absent if the particles size is less than 1 mm. When the gaseous products leave the bio-mass particle, they enter the surrounding gas phase, where they can decompose further.