Introduction:  The energy that we get directly from the sun is called solar energy. The nuclear fusion reactions occurring inside the sun release enormous amount of energy in the form of heat and light. The solar energy received by the near earth space is approximately1.4 kJ/s/m2 known as solar constant

The Earth receives an incredible supply of solar energy. The sun, an average star, is a fusion reactor that has been burning over 4 billion years. It provides enough energy in one minute to supply the world's energy needs for one year. In one day, it provides more energy than our current population would consume in 27 years. In fact, "The amount of solar radiation striking the earth over a three-day period is equivalent to the energy stored in all fossil energy sources."

Solar energy is a free, inexhaustible resource, yet harnessing it is a relatively new idea. The ability to use solar power for heat was the first discovery. A Swiss scientist, Horace de Saussure, built the first thermal solar collector in 1767, which was later used to heat water and cook food. The first commercial patent for a solar water heater went to Clarence Kemp of the US in 1891. This system was bought by two California executives and installed in one-third of the homes in Pasadena by 1897. 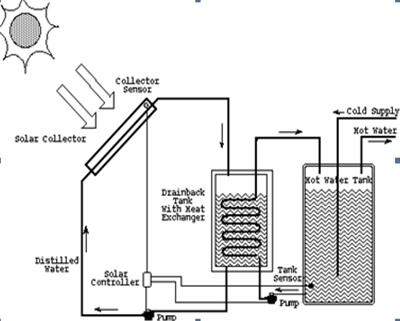 Solar heat collectors consists of natural materials like stones, bricks, (or) materials like glass, which can absorb heat during the day time and release it slowly at night.

3. Solar water heater: In order to heat water using solar energy, a collector, often fastened to a roof or a wall facing the sun, heats working fluid that is either pumped (active system) or driven by natural convection (passive system) through it. The collector could be made of a simple glass-topped insulated box with a flat solar absorber made of sheet metal, attached to copper pipes and dark-colored, or a set of metal tubes surrounded by an evacuated (near vacuum) glass cylinder. In industrial cases a parabolic mirror can concentrate sunlight on the tube. Heat is stored in a hot water storage tank. The volume of this tank needs to be larger with solar heating systems in order to allow for bad weather[clarification needed], and because the optimum final temperature for the solar collector[clarification needed] is lower than a typical immersion or combustion heater. The heat transfer fluid (HTF) for the absorber may be the hot water from the tank, but more commonly (at least in active systems) is a separate loop of fluid containing anti-freeze and a corrosion inhibitor which delivers heat to the tank through a heat exchanger (commonly a coil of copper tubing within the tank). Another lower-maintenance concept is the 'drain-back': no anti-freeze is required; instead, all the piping is sloped to cause water to drain back to the tank. The tank is not pressurized and is open to atmospheric pressure. As soon as the pump shuts off, flow reverses and the pipes are empty before freezing could occur.