The chemistry of Biomass pyrolysis

Introduction:  The problems that are associated with the use of fossil fuels demand a transition to renewable sources for energy and materials. Biomass is a natural treasure for chemicals that up to now are made from fossil resources. Unfortunately, the heterogeneity and complexity of biomass still preclude exploitation of its full potential. New technologies for economical valorization of biomass are under development, but cannot yet compete with petrochemical processes. However, rising prices of fossil resources, inevitably will lead to replacement of oil refineries with bio refineries. A bio refinery uses various types of biomass feedstock’s that are processed via different technologies into heat, power and various products. The bio refinery is self-sustainable with respect to heat and power and puts no burden on the environment. Thermochemical processes such as fast pyrolysis can play an important role in bio refineries. Within the scope of biomass pyrolysis as a renewable option to produce chemicals this chapter presents a review of some pyrolysis-based technologies that are potential candidates and that form the starting point for the work that is described in this thesis. 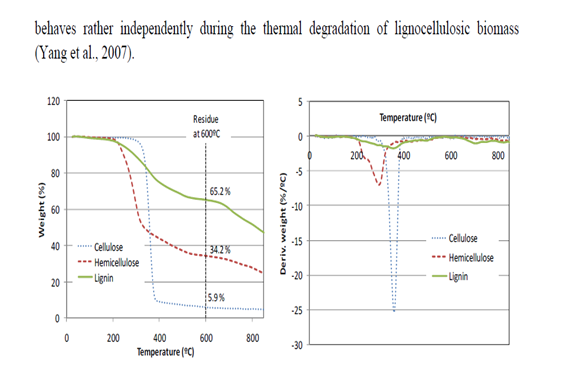 Thermal Degradation of Biomass Components:  The term pyrolysis is used to describe the degradation of a substance by exposure to high temperatures. By definition, pyro lytic processes take place in the absence of oxygen or any other external element that may interact with the substance under consideration. The addition of heat causes the atoms in the molecule to increase their energy of vibration. When the kinetic energy associated with this vibration is greater than the potential energy of the chemical bond, the interaction is broken resulting in the transformation of the original compound and the formation of new species.

Thermal degradation processes are usually highly complex, owing to the numerous reactions taking place at one time, the unstable nature of intermediate products generated and the high temperatures involved. Primary decomposition reactions in a simple molecule like ethanol or acetic acid may involve several transformations (elimination, chemical rearrangement, substitutions, additions) occurring simultaneously, or sequentially, as the molecule is progressively heated to increasingly high temperatures (Moldoveanu, 1998). This complexity is far greater when the subject of the pyrolysis reaction is a solid composite material like lignocellulosic biomass, and when this material is heated very rapidly as happens in the fast pyrolysis processes. This section provides an introduction to the chemical basis of biomass pyrolysis including information about primary degradation reactions taking place on the biomass components and secondary homogeneous and heterogeneous reactions taking place on the resulting products. The thermal degradation of biomass can be investigated by monitoring the sample mass as it is progressively heated under inert atmospheric conditions. Figure 4 shows the thermo gravimetric analysis (TGA) of lignocellulosic biomass and its main components (lignin, cellulose and hemicellulose). It has been described that each one of the components. Behaves rather independently during the thermal degradation of lignocellulosic biomass (Yang et al., 2007).

The TGA analysis shows three areas of weight loss that may be associated with different stages in the pyrolysis process. The first one takes place at temperatures between 120-200ºC and involves the volatilization of free water and light organic products. The second stage takes place at temperatures between 200-450ºC and involves the thermal degradation of the main biomass components. The third stage takes place at temperatures above 450-500ºC, and involves the progressive cracking of resilient elements present in the original biomass (lignin) and carbonized products (Yang et al., 2007; Wu et al., 2009) The TG analysis in Figure 4 also shows that hemicellulose decomposes at Lowe temperatures (225-300ºC) than crystalline cellulose (350-400ºC), leaving a residue of solid char that represents around 32 wt.% of the original mass at 500ºC. Despite the higher degradation temperature required, pyrolysis of cellulose generates virtually no solid residue, which may be attributed to low cross linking reactions during the degradation process.

Charcoal: Pyrolysis has been used since ancient times for turning wood into charcoal on an industrial scale. Besides wood, the process can also use sawdust and other wood waste products.

Charcoal is obtained by heating wood until its complete pyrolysis (carbonization) occurs, leaving only carbon and inorganic ash. In many parts of the world, charcoal is still produced semi-industrially, by burning a pile of wood that has been mostly covered with mud or bricks. The heat generated by burning part of the wood and the volatile byproducts pyrolyzes the rest of the pile. The limited supply of oxygen prevents the charcoal from burning. A more modern alternative is to heat the wood in an airtight metal vessel, which is much less polluting and allows the volatile products to be condensed.

The original vascular structure of the wood and the pores created by escaping gases combine to produce a light and porous material. By starting with a dense wood-like material, such as nutshells or peach stones, one obtains a form of charcoal with particularly fine pores (and hence a much larger pore surface area), called activated carbon, which is used as an adsorbent for a wide range of chemical substances.