Introduction: Photosynthesis removes carbon from the abiotic environment (fixes carbon into organic molecules) Carbon moves through food chain through consumption of one organism by another Cellular respiration, combustion, and erosion of limestone return carbon to the atmosphere, water and abiotic environment:  The global carbon budget is the balance of the exchanges (incomes and losses) of carbon between the carbon reservoirs or between one specific loop (e.g., atmosphere ↔ biosphere) of the carbon cycle. An examination of the carbon budget of a pool or reservoir can provide information about whether the pool or reservoir is functioning as a source or sink for carbon dioxide. The carbon cycle was initially discovered by Joseph Priestley and Antoine Lavoisier, and popularized by Humphry Dav. 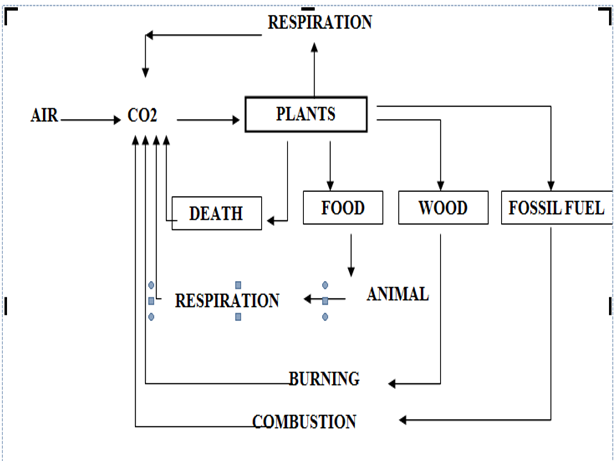 Relevance for the global climate: Carbon-based molecules are crucial for life on earth, as it is the main component of biological compounds. Carbon is also a major component of many minerals. Carbon also exists in various forms in the atmosphere. Carbon dioxide (CO2) is partly responsible for the greenhouse effect and is the most important human-contributed greenhouse gas.

In the past two centuries, human activities have seriously altered the global carbon cycle, most significantly in the atmosphere. Although carbon dioxide levels have changed naturally over the past several thousand years, human emissions of carbon dioxide into the atmosphere exceed natural fluctuations. Changes in the amount of atmospheric CO2 are considerably altering weather patterns and indirectly influencing oceanic chemistry. Records from ice cores have shown that, although global temperatures can change without changes in atmospheric CO2 levels, CO2 levels cannot change significantly without affecting global temperatures. Current carbon dioxide levels in the atmosphere exceed measurements from the last 420,000 years and levels are rising faster than ever recorded,making it of critical importance to better understand how the carbon cycle works and what its effects are on the global climate.

Main Components: The global carbon cycle is now usually divided into the following major reservoirs of carbon interconnected by pathways of exchange:

The carbon exchanges between reservoirs occur as the result of various chemical, physical, geological, and biological processes. The ocean contains the largest active pool of carbon near the surface of the Earth. The natural flows of carbon between the atmosphere, ocean, and sediments is fairly balanced, so that carbon levels would be roughly stable without human influence.

Carbon dioxide leaves the atmosphere through plant respiration, thus entering the terrestrial and oceanic biospheres. Carbon dioxide also dissolves directly from the atmosphere into bodies of water (oceans, lakes, etc.), as well as dissolving in precipitation as raindrops fall through the atmosphere. When dissolved in water, carbon dioxide reacts with water molecules and forms carbonic acid, which contributes to ocean acidity. It can then be absorbed by rocks through weathering. It also can acidify other surfaces it touches or be washed into the ocean.

Human activity over the past two centuries has significantly increased the amount of carbon in the atmosphere, mainly in the form of carbon dioxide, both by modifying ecosystems' ability to extract carbon dioxide from the atmosphere and by emitting it directly, e.g. by burning fossil fuels and manufacturing concrete.

Because carbon uptake in the terrestrial biosphere is dependent on biotic factors, it follows a diurnal and seasonal cycle. In CO2 measurements, this cycle is often called a Keeling curve. It is strongest in the northern hemisphere, because this hemisphere has more land mass than the southern hemisphere and thus more room for ecosystems to absorb and emit carbon.

Carbon leaves the terrestrial biosphere in several ways and on different time scales. The combustion or respiration of organic carbon releases it rapidly into the atmosphere. It can also be exported into the oceans through rivers or remain sequestered in soils in the form of inert carbon. Carbon stored in soil can remain there for up to thousands of years before being washed into rivers by erosion or released into the atmosphere through soil respiration. The length of carbon sequestering in soil is dependent on local climatic conditions and thus changes in the course of climate change.

Geological carbon cycle: The geologic component of the carbon cycle operates slowly in comparison the other parts of the global carbon cycle. It is one of the most important determinants of the amount of carbon in the atmosphere, and thus of global temperatures.

Carbon can leave the geosphere in several ways. Carbon dioxide is released during the metamorphosis of carbonate rocks when they are subducted into the earth's mantle. This carbon dioxide can be released into the atmosphere and ocean through volcanoes and hotspots. It can also be removed by humans through the direct extraction of kerogens in the form of fossil .