Introduction: Once the water reaches the ground, one of two processes may occur;

2) The water may penetrate the surface and become groundwater. Groundwater either seeps its way to into the oceans, rivers, and streams, or is released back into the atmosphere through transpiration. The balance of water that remains on the earth's surface is runoff, which empties into lakes, rivers and streams and is carried back to the oceans, where the cycle begins again. 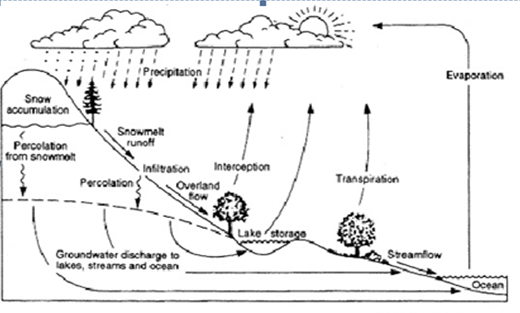 OVER UTILIZATION OF SURFACE AND GROUND WATER:  With increasing human population and rapid development, the world water withdrawal demands have increased many folds and a large proportion of the water withdrawn is polluted due to anthropogenic activities.Out of the total water reserves of the world, about 97% is salty water and only 3% is fresh water

Even this small fraction of fresh water is not available to us as most of it is locked up in polar ice caps and just 0.003% is readily available to us in the form of ground water and surface water.

Causes of flood and drought:

CONFLICTS OVER WATER: Indispensability of water and its unequal distribution has often led to inter-state or international disputes. Issues related to sharing of river water have been largely affecting our farmers and also shaking our governments. Many countries are engaged in bitter rivalries over this precious resource.

For instance,Argentina and Brazil, dispute each other's claims to the La Plata river,India and Pakistan fight over the rights to water from the Indus,Mexico and USA have come in conflict over the Colorado river,India and Bangladesh are fighting for Brahmaputra river, and Iran and Iraq contest for the water from Shatt-Al- Arab River.

Effects of over exploitation of water: