Introduction: Animals obtain most of their PO43- by consumption of other animals and from water. PO43- is released to the soil again by decomposers.  Dissolved PO43- gets absorbed by algae and aquatic plants. Decomposers break down waste and returns PO43- to sediments on the seabed. Some returns to terrestrial environment through geologic processes and via seabirds.

Low phosphorus (chemical symbol, P) availability slows down microbial growth, which has been shown in studies of soil microbial biomass. Soil microorganisms act as sinks and sources of available P in the biogeochemical cycle. Locally, transformations of PO4 are microbially driven; however, the major transfers in the global cycle of P are not driven by microbial reactions, but by tectonic movements in geologic time. Further studies need to be performed for integrating different processes and factors related to gross phosphorus mineralization and microbial phosphorus turnover in general. 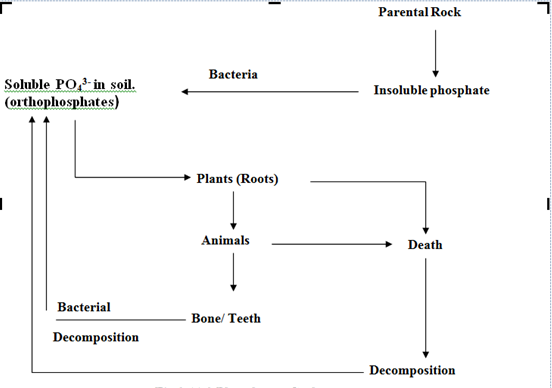 Ecological function: Phosphorus is an essential nutrient for plants and animals in the form of ions. Phosphorus is a limiting nutrient for aquatic organisms. Phosphorus forms parts of important life-sustaining molecules that are very common in the biosphere. Phosphorus does not enter the atmosphere, remaining mostly on land and in rock and soil minerals. Eighty percent of the mined phosphorus is used to make fertilizers, and a type of phosphorus such as dilute phosphoric acid is used in soft drinks. Phosphates may be effective in such ways but also causes pollution issues in lakes and streams. Enrichment of phosphate can lead to eutrophication of fresh and inshore marine waters, leading to algae bloom because of the excess nutrients. Bacteria consume the algae and a bacterial bloom ensues. Cellular respiration of bacteria and decomposers use all the oxygen in the water, causing many fish to die.

Biological function: The primary biological importance of phosphates is as a component of nucleotides, which serve as energy storage within cells (ATP) or when linked together, form the nucleic acids DNA and RNA.The double helix of our DNA is only possible because of the phosphate ester bridge that binds the helix. Besides making biomolecules, phosphorus is also found in bones, whose strength is derived from calcium phosphate, in enamel of mammalian teeth, exoskeleton of insects, and phospholipids (found in all biological membranes). It also functions as buffering agent in maintaining acid base homeostasis in the human body.

Process of the cycle: Phosphates move quickly through plants and animals; however, the processes that move them through the soil or ocean are very slow, making the phosphorus cycle overall one of the slowest biogeochemical cycles.

Unlike other cycles of matter compounds, phosphorus cannot be found in the air as a gas, it only occurs under highly reducing conditions as the gas phosphine PH3. This is because at normal temperature and circumstances, it is a solid in the form of red and white phosphorus. It usually cycles through water, soil and sediments. Phosphorus is typically the limiting nutrient found in streams, lakes and fresh water environments. As rocks and sediments gradually wear down, phosphate is released. In the atmosphere phosphorus is mainly small dust particles.

Initially, phosphate weathers from rocks. The small losses in a terrestrial system caused by leaching through the action of rain are balanced in the gains from weathering rocks. In soil, phosphate is absorbed on clay surfaces and organic matter particles and becomes incorporated (immobilized). Plants dissolve ionized forms of phosphate. Herbivores obtain phosphorus by eating plants, and carnivores by eating herbivores. Herbivores and carnivores excrete phosphorus as a waste product in urine and feces. Phosphorus is released back to the soil when plants or animal matter decomposes and the cycle repeats.

Little of thus released phosphorus is taken by biota (organic form) whereas, large proportion reacts with other soil minerals leading to precipitation in unavailable forms. The later stage of weathering and soil development. Available phosphorus is found in a biogeochemical cycle in the upper soil profile, while phosphorus found at lower depths is primarily involved in geochemical reactions with secondary minerals. Plant growth depends on the rapid root uptake of phosphorus released from dead organic matter in the biochemical cycle. Phosphorus is limited in supply for plant growth. Phosphates move quickly through plants and animals; however, the processes that move them through the soil or ocean are very slow, making the phosphorus cycle overall one of the slowest biogeochemical cycles.