Ozone is a natural trace component of the atmosphere. It is created continuously through the action of sunlight and oxygen in the upper atmosphere. For millions of years ozone has been protecting the earth by absorbing ultraviolet or poisonous radiation from the sun. This poisoning of the Earth’s ozone layer is increasingly attracting worldwide concern for the global environment and the health effects of life on the Planet Earth. 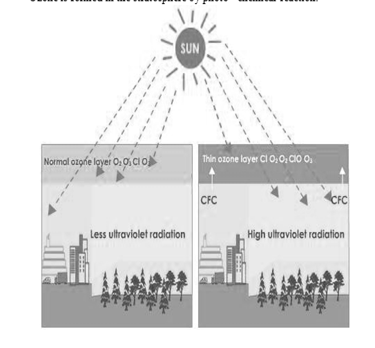 As the ozone layer is getting thinner and thinner more and more harmful UV rays are passing into our atmosphere. These rays cause cancer, cataracts, and lowered immunity to diseases. In recent years, scientists have sounded alarms internationally about the depletion of the ozone layer, citing chemical pollution as the major cause. Or ozone is formed in the stratosphere by photo - chemical reaction.

The most pronounced decrease in ozone has been in the lower stratosphere. However, the ozone hole is most usually measured not in terms of ozone concentrations at these levels (which are typically of a few parts per million) but by reduction in the total column ozone, above a point on the Earth's surface, which is normally expressed in Dobson units, abbreviated as "DU". Marked decreases in column ozone in the Antarctic spring and early summer compared to the early 1970s and before have been observed using instruments such as the Total Ozone Mapping Spectrometer (TOMS).

Reductions of up to 70% in the ozone column observed in the austral (southern hemispheric) spring over Antarctica and first reported in 1985 (Farman et al. 1985) are continuing.[7] Through the 1990s, total column ozone in September and October have continued to be 40–50% lower than pre-ozone-hole values. In the Arctic the amount lost is more variable year-to-year than in the Antarctic. The greatest declines, up to 30%, are in the winter and spring, when the stratosphere is colder.

Reactions that take place on polar stratospheric clouds (PSCs) play an important role in enhancing ozone depletion.[8] PSCs form more readily in the extreme cold of Antarctic stratosphere. This is why ozone holes first formed, and are deeper, over Antarctica. Early models failed to take PSCs into account and predicted a gradual global depletion, which is why the sudden Antarctic ozone hole was such a surprise to many scientists.[citation needed]

In middle latitudes it is preferable to speak of ozone depletion rather than holes. Declines are about 3% below pre-1980 values for 35–60°N and about 6% for 35–60°S. In the tropics, there are no significant trends.