Despite the increased attention given to public participation in planning by many of the Federal agencies involved in the development and management of natural resources, the initial efforts to implement this concept reflect numerous uncertainties about the development of effective programs, and the absence of criteria by which to measure its effectiveness and overall worth.  This at least partially stems from the fact that there has seldom been an adequate resolution in policy or practice of what is expected to be accomplished by involving the public in planning. 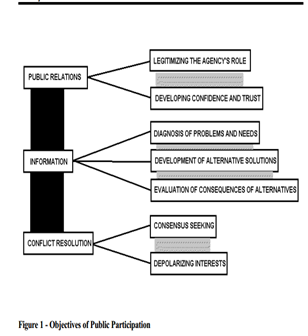 Some of the more common reasons given in planning directives as justification for a public role in planning,  deal with such issues as facilitating agency programs by development of community consensus, the creation  of a favorable public image toward the agency and its planning procedures, and providing for an adequate  exchange of information between the agency and the public.  General objectives such as these offer the planner very little guidance in his attempts to effectively involve the public in water planning activities.  These efforts are made more difficult because there are many objectives which can be achieved by public participation and there is no single procedure, such as public hearings, which is effective in achieving all of them.  Rather, there are a wide variety of public involvement techniques from which the planner can choose, and decisions must be made initially and throughout the planning process as to which techniques to use, when to use them, and how to apply them.  In order to make these decisions it is important that the objectives of public participation be clearly spelled out and that the techniques which are used are structured for those specific objectives.  The techniques which are used depend on such variables as the particular "publics"  concerned, the relevant information requirements, the overall planning situation, and time, resources, and skills available, including those that can be contributed by the public and outside consultants.

Three general objectives are suggested which should be considered by the planner in the design of a public participation program for a specific planning situation.  These are referred to as:

1)      The public relations objective; 2) the information objective; and,

These general objectives are broken down into eight second-order objectives which serve to clarify and to provide workable concepts for both the design and evaluation of such programs.

The public relations objective is based on the premise that in order for the planning agency to develop plans which have broad public support and acceptance, the public must view the agency's role in the planning process as legitimate, and must have confidence and trust in the agency and its planning procedure.

Legitimizing the Agency's Role in the Planning Process: The need for legitimizing the agency's role in the planning process results from the fact that the public is frequently uninformed about the responsibilities and the authorities of the planning agency.  A large measure of the public dissatisfaction with water resource plans stems from a failure by the public to recognize and understand that the agency operates under constraints imposed upon it by higher authority.  There are limitations to the authority of the planning agency to undertake certain alternative solutions which may be desired by the public.  In certain circumstances, this may lead to a disparity between the capability of the agency to satisfy community needs and the expectations of the community.  This is a manifestation of the more general disparity between the global manner in which citizens perceive community problems and needs, and the compartmentalized structure of public programs designed.