Introduction: Pressure: When a fluid is at rest, the fluid exerts a force normal to a solid boundary or any imaginary plane drawn through the fluid. Since the force may vary within the region of interest, we conveniently define the force in terms of the pressure, P, of the fluid. The pressure is defined as the force per unit area.

In Fig: 1 pressure variation of a fluid at different locations is illustrated. Commonly the pressure changes from point to point. We can define the pressure at a point as

Where is the area on which the force acts? It is a scalar field and varies spatially and temporally as given P = P (x, y, z, t)

Pascal's Law: Pressure at a point: The Pascal's law states that the pressure at a point in a fluid at rest is the same in all directions. Let us prove this law by considering the equilibrium of a small fluid element shown in Fig: 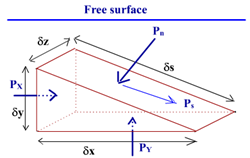 Since the fluid is at rest, there will be no shearing stress on the faces of the element.

The equilibrium of the fluid element implies that sum of the forces in any direction must be zero. For the x-direction:

Force due to Px is

Component of force due to Pn

Summing the forces we get

Similarly in the y-direction, we can equate the forces as given below

Component of force due to Pn

The negative sign indicates that weight of the fluid element acts in opposite direction of the z-direction. Summing the forces yields. Since the volume of the fluids is very small, the weight of the element is negligible in comparison with other force terms. So the above Equation becomes  Py = Pn   Hence, Pn = Px = Py

Similar relation can be derived for the z-axis direction.

This law is valid for the cases of fluid flow where shear stresses do not exist. The cases are Fluid at rest. No relative motion exists between different fluid layers. For example, fluid at a constant linear acceleration in a container. Ideal fluid flows where viscous force is negligible.