Introduction:  Many of us would have seen the demonstration of a needle being supported on water surface without it being wetted. This is due to the surface tension of water.

Surface Tension Effect on Solid-Liquid Interface: In liquids cohesive forces between molecules lead to surface tension. The formation of dropletsis a direct effect of this phenomenon. So also the formation of a free jet, when liquid flows outof an orifice or opening like a tap. The pressure inside the droplets or jet is higher due to thesurface tension. 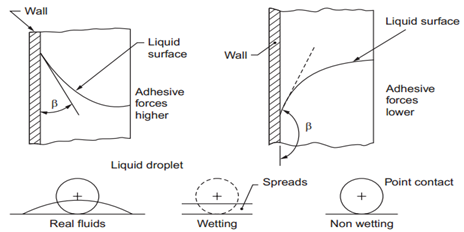 Liquids also exhibit adhesive forces when they come in contact with other solid or liquid surfaces. At the interface this leads to the liquid surface being moved up or down forming a curved surface. When the adhesive forces are higher the contact surface is lifted up forming a concave surface. Oils, water etc. exhibit such behavior. These are said to be surface wetting. When the adhesive forces are lower, the contact surface is lowered at the interface and a convex surface results as in the case of mercury. Such liquids are called no wetting. These are shown in Fig.

At the surface this contact angle will be maintained due to molecular equilibrium. The result of this phenomenon is capillary action at the solid liquid interface. The curved surface creates a pressure differential across the free surface and causes the liquid level to be raised or lowered until static equilibrium is reached.