Introduction: Momentum Equation Applied to Propellers the propeller is a mechanical devise that is used to increase the fluid momentum. Many times it is used for propulsion purposes of airplanes, ships and there devices (thrust) as. The propeller can be stationary like in cooling tours, fan etc. The other common used of propeller is used mostly to move fluids as a pump.

The propeller analysis of unsteady is complicated due to the difficulty in understanding the velocity field. For a steady state the analysis is simpler and used here to provide an example of steady state. In the Figure  the fluid flows from the left to the right. Either it is assumed that some of the fluid enters into the container and fluid outside is not affected by the propeller. Or there is a line (or surface) in which the fluid outside changes only the flow direction. This surface is called slip surface. Of course it is only approximation but is provided a crude tool. Improvements can be made to this analysis. Here, this analysis is used for academic purposes. Liquid Fig. Propeller schematic to explain the change of momentum due to velocity. As first approximation, the pressure around around control volume is the same. Thus, pressure drops from the calculation. The one dimensional momentum equation is reduced

MOMENTUM EQUATION APPLICATION: Combining the control volume between points 1 and 3 with (note that there are no external forces) with points 4 and 2 results in 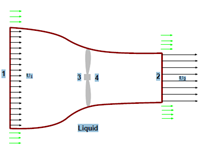 This analysis provides way to calculate the work needed to move this propeller. Note

Jet propulsion is a mechanism in which the air planes and other devices arepropelled. Essentially, the air is sucked into engine and with addition heating (burningfuel) the velocity is increased. Further increase of the exit area with the increased ofthe burned gases further increase the thrust. The analysis of such device in complicatedand there is a whole class dedicated for such topic in many universities. Here, a verylimited discussion related to the steady state is offered.The difference between the jets propulsion and propellers is based on the energysupplied. The propellers are moved by a mechanical work which is converted to thrust.In Jet propulsion, the thermal energy is converted to thrust. Hence, this direct conversioncan be, and is, in much case more efficient. Furthermore, as it will be shown inthe Chapter on compressible flow it allows achieving velocity above speed of sound, amajor obstacle in the past.

An academic example to demonstrate how steady state calculations are done for a moving control volume.