LIQUID MANOMETERS
Technically a manometer is any device used to measure pressure. However, the word manometer is commonly used to mean a pressure sensor which detects pressure change by means of liquid in a tube.


There are many forms of flow meters. For flow in closed channels (such as pipes), the most commonly used, and the devices we shall consider here, are:

The U-tube manometer is somewhat self-descriptive. In its basic form it consists of a clear glass or plastic tube shaped into the form of a 'U'. The tube is partially filled with a liquid, such as water, alcohol, or mercury (although for safety reasons mercury is no longer commonly used). The lower the density of the liquid, the higher the sensitivity of the manometer. The diagram opposite shows a basic U-tube manometer. Both ends of the tube are open, and atmospheric pressure acts equally on the liquid through each end. Therefore the height of the liquid on each side of the U (in each limb) is equal. Now we show the U-tube manometer with an unknown pressure Punknown applied to one limb. The other limb of the tube is left as it was, that is, atmospheric pressure Patm is maintained at its open end. The unknown pressure acts on the liquid in the tube, forcing it down the limb it is applied to. Because the liquid is incompressible, it rises up the other limb. Hence the height of the liquid on either side of the tube is no longer equal. The difference between the height of the liquid in each limb, h, is proportional to the difference between the unknown pressure and atmospheric pressure. 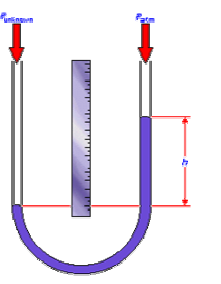 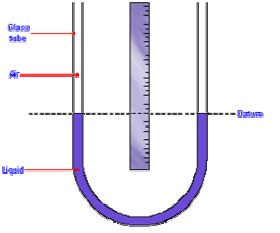 
The inclined tube manometer is a differential pressure sensor more sensitive than the U-tube manometer. Hence it is more suitable for use with smaller pressure measurements or where greater accuracy is required. This diagram shows its basic design.