Introduction: Fluid flow can cause pressure drops large enough to result in boiling.  Vapor bubbles and pockets form such that the fluid in its liquid phase is no longer continuous. 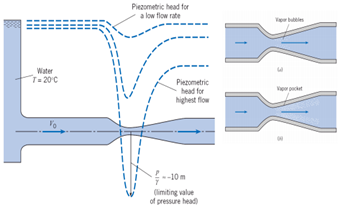 (Cross section of area must be perpendicular to velocity)

Selection of Control Volume: You choose the control volume that is most convenient for the problem you want to solve. Steady flow problems are often easier than unsteady ones, so control volume a) may be preferable.

Change of Mass in a Control Volume:

Dividing by a small t gives the rate form:

(Note that this is the conservation equation for mass)

Conservation of Mass: No mass is created or destroyed.

This is intuitive and thus the book does not stress it, but this is one of the most fundamental equations of physics.

(Note that Einstein would probably disagree:  Mass can be converted to energy and vice versa, , but as long as we restrict ourselves to non-relativistic problems, the equation on top is true.)