Introduction: The general discussion on liquid–liquid will be provided and the gas–liquid flow will be discussed as a special case. Generally, there are two possibilities for two different materials to flow (it is also correct for solid–liquid and any other combination). The materials can flow in the same direction and it is referred as co–current flow. When the materials flow in the opposite direction, it is referred as counter–current. In general, the co-current is the more common. Additionally, the counter–current flow must have special configurations of long length of flow. Generally, the counter–current flow has a limited length window of possibility in a vertical flow in conduits with the exception of magneto hydrodynamics. The flow regimes are referred to the arrangement of the fluids.

The main difference between the liquid–liquid flows to gas-liquid flow is that gas density is extremely lighter than the liquid density. For example, water and air flow as oppose to water and oil flow. The other characteristic that is different between the gas flow and the liquid flow is the variation of the density. For example, a reduction of the pressure by half wills double the gas volumetric flow rate while the change in the liquid is negligible. Thus, the flow of gas–liquid can have several flow regimes in one situation while the flow of liquid–liquid will (probably) have only one flow regime.

Co–Current Flow: In Co–Current flow, two liquids can have three main categories: vertical, horizontal, and whatever between them. The vertical configuration has two cases, up or down. It is common to differentiate between the vertical (and near vertical) and horizontal (and near horizontal). There is no exact meaning to the word “near vertical” or “near horizontal” and there is no consensus on the limiting angles (not to mention to have limits as a function with any parameter that determine the limiting angle). The flow in inclined angle (that not covered by the word “near”) exhibits flow regimes not much different from the other two. Yet, the limits between the flow regimes are considerably different.

As the lighter liquid (or the gas phase) flow rate increases (superficial velocity), the friction between the phases increase. The superficial velocity is referred to as the velocity that any phase will have if the other phase was not exist. This friction is one of the causes for the instability which manifested itself as waves and changing the surface from straight line to a different configuration (see Figure). The wave shape is created to keep the gas and the liquid velocity equal and at the same time to have sheared stress to be balance by surface tension. The configuration of the cross section not only depends on the surface tension and other physical properties of the fluids but also on the material of the conduit.

Vertical Flow:The vertical flow has two possibilities, with the gravity or against it. In engineering application, the vertical flow against the gravity is more common used. There is a difference between flowing with the gravity and flowing against the gravity. The buoyancy is acting in two different directions for these two flow regimes. For the flow against gravity, the lighter liquid has a buoyancy that acts as an “extra force” to move it faster and this effect is opposite for the heavier liquid. The opposite is for the flow with gravity. Thus, there are different flow regimes for these two situations. The main reason that causes the difference is that the heavier liquid is more dominated by gravity (body forces) while the lighter liquid is dominated by the pressure driving forces. 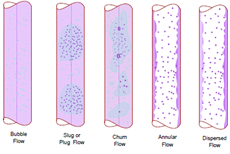 Flow against Gravity: For vertical flow against gravity, the flow cannot start as a stratified flow. The heavier liquid has to occupy almost the entire cross section before it can flow because of the gravity forces. Thus, the flow starts as a bubble flow. The increase of the lighter liquid flow rate will increase the number of bubbles until some bubbles start to collide. When many bubbles collide, they create a large bubble and the flow is referred to as slug flow or plug flow (see Figure). Notice, the different mechanism in creating the plug flow in horizontal flow compared to the vertical flow further increase of lighter liquid flow rate will increase the slug size as more bubbles collide to create “super slug”; the flow regime is referred as elongated bubble flow. The flow is less stable as more turbulent flow and several “super slug” or churn flow appears in more chaotic way, see Figure After additional increase of “super slug” , all these “elongated slug” unite to become an annular flow.