Drag Force and its Coefficient

Introduction: Major forces affecting aircraft motion are discussed. One group of those forces is aerodynamic forces that split into two forces: Lift force or lift, and Drag force or drag. A pre-requisite to aircraft performance analysis is the ability to calculate the aircraft drag at various flight conditions. One of the jobs of a performance engineer is to determine drag force produced by an aircraft at different altitudes, speeds and configurations. This is not an easy task, since, this force is a function of several parameters including aircraft configuration. As it was discussed, the drag is a function of aircraft speed, air density, and its configuration. Each aircraft is designed with a unique configuration, thus, aircraft performance must take into account this configuration. The configuration effect of aircraft drag is calculated through the drag coefficient (CD), plus an area that relates to the aircraft.

In aircraft with large wing, the top-view of wing (in fact gross wing) is the reference area. The measurements of these areas are easy and they include the most important aerodynamic part of aircraft. This simplified reference area is compensated with the complicated drag coefficient:

The drag coefficient is non-dimensional parameter, but it takes into account every aerodynamic configuration of the aircraft including, wing, tail, fuselage and landing gear. This coefficient has two main parts (as will be explained in the next section). The first part is referred to as lift-related drag coefficient or induced drag coefficient (CDi) and the second part is called zero-lift drag coefficient (CDo). The calculation of the first one is an easy job, but it takes a long time to determine the second part. In large transport aircraft, this task is done by a group of up to twenty engineers for a time period of up to six months. For this reason, the large portion of this chapter is devoted to the calculation of CDo.  This calculation not only is time consuming but also is very sensitive, since it influences every aspect of aircraft performance. Drag is the enemy of flight and its cost. One of the primary functions of aerodynamicists is to reduce this coefficient. Aircraft designers are also very sensitive about this coefficient, because any change in the external configuration of aircraft will change this coefficient and finally aircraft direct operating cost. As a performance engineer, you must be able to estimate the CDoof any aircraft just by looking at its three-view with an accuracy of about 30%. An you spend more time for calculation, this estimation will be more accurate, but never exact unless you use an aircraft model in wind tunnel or flight test measurements with real aircraft. The method presented in this chapter is 95% accurate for subsonic aircraft and 85% for supersonic aircraft. 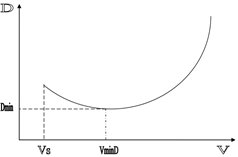 aerodynamic cleanness with respect to frictional characteristics, and shape and protuberances such as cockpit, antennae, or external fuel tanks. It increases with the aircraft velocity and is the main factor in determining the aircraft maximum speed. The second term represents induced drag (drag due to lift). Its contribution is highest at low velocities, and it decreases with increasing flight velocities.  If we combine these two curves (Di and Do), we will have a parabolic curve such as shown in figure.  The parabolic drag model is not exact; but accurate enough for the purpose of performance calculation.

Although the drag and the drag coefficient can be expressed in a number of ways, for reasons of simplicity and clarity, the parabolic drag polar will be used in all main analyses. This is true only for subsonic flight. For the existing supersonic aircraft, the drag cannot be adequately described by such a simplified expression. Exact calculations must be carried out using extended equations or tabular data. However, the inclusion of more precise expressions for drag at this stage will not greatly enhance basic understanding of performance, and thus, will be included only in some calculated

Examples and exercises. Note that the curve begins from stall speed as an aircraft is not able to maintain level flight at any speed lower than stall speed.

The same conclusion is true for the variation of drag coefficient (CD) versus lift coefficient (CL) as shown in figure. We can mathematically describe such curve with a second order parabolic curve: