Introduction: An orifice is a small aperture through which the fluid passes. The thickness of an orifice in the direction of flow is very small in comparison to its other dimensions. If a tank containing a liquid has a hole made on the side or base through which liquid flows, then such a hole may be termed as an orifice. The rate of flow of the liquid through such an orifice at a given time will depend partly on the shape, size and form of the orifice. An orifice usually has a sharp edge so that there is minimum contact with the fluid and consequently minimum frictional resistance at the sides of the orifice. If a sharp edge is not provided, the flow depends on the thickness of the orifice and the roughness of its boundary surface too.

Flow from an Orifice at the Side of a Tank under a Constant Head: 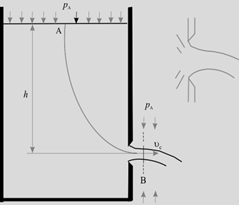