Introduction: Traditionally, the topic of multi–phase flow is ignored in an introductory class on fluid mechanics. For many engineers, this class will be the only opportunity to be exposed to this topic. The knowledge in this topic without any doubts is required for many engineering problems. Calculations of many kinds of flow deals with more than one phase or material flow. The author believes that the trends and effects of multiphase flow could and should be introduced and considered by engineers.  It is recognized that multiphase flow is still evolving. In fact, there is not a consensus to the exact map of many flow regimes.

History: The study of multi–phase flow started for practical purposes after World War II. Initially the models were using simple assumptions. For simple models, there are two possibilities  the fluids/materials are flowing in well homogeneous mixed (where the main problem to find the viscosity), (2) the fluids/materials are flowing separately where the actual total loss pressure can be correlated based on the separate pressure loss of each of the material. If the pressure loss was linear then the total loss will be the summation of the two pressure losses (of the lighter liquid (gas) and the heavy liquid). Under this assumption the total is not linear and experimental correlation was made. The flow patterns or regimes were not considered. This was suggested by Lockhart and Martin Elli who use a model where the flow of the two fluids is independent of each other. They postulate that there is a relationship between the pressure loss of a single phase and combine phases pressure loss as a function of the pressure loss of the other phase. It turned out this idea provides good crude results in some cases.

KIND OF MULTI-PHASE FLOW:All the flows are a form of multiphase flow. The discussion in the previous chapters is only as approximation when multiphase can be “reduced” into a single phase flow. 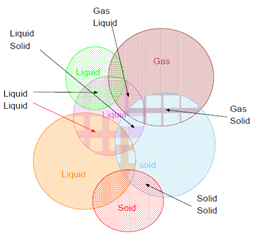 Forexample, consider air flow that was discussed and presented earlier as a single phase flow. Air is not a pure material but a mixture of many gases. In fact, many proprieties of air are calculated as if the air is made of well mixed gases of Nitrogen and Oxygen. The results of the calculations of a mixture do not change much if it is assumed that the air flow as stratified flow 4 of many concentration layers (thus, many layers (infinite) of different materials). Practically for many cases, the homogeneous assumption is enough and suitable. However, this assumption will not be appropriate when the air is stratified because of large body forces, or a large acceleration. Adopting this assumption might lead to a larger error. Hence, there are situations when air flow has to be considered as multiphase flow and this effect has to be taken into account.

In our calculation, it is assumed that air is made of only gases. The creation of clean room is a proof that air contains small particles. In almost all situations, the cleanness of the air or the fact that air is a mixture is ignored. The engineering accuracy is enough to totally ignore it. Yet, there are situations where cleanness of the air can affect the flow. For example, the cleanness of air can reduce the speed of sound. In the past, the breaks in long trains were activated by reduction of the compressed line (a patent no. 360070 issued to George Westinghouse, Jr., March 29, 1887). In a four miles long train, the breaks would start to work after about 20 seconds in the last wagon. Thus, a 10% change of the speed of sound due to dust particles in air could reduce the stopping time by 2 seconds (50 meter difference in stopping) and can cause an accident.

One way to categorize the multiphase is by the materials flows, For example, the flow of oil and water in one pipe is a multiphase flow. This flow is used by engineers to reduce the cost of moving crude oil through a long pipes system. The “average” viscosity is meaningless since in many cases the water follows around the oil. The water flow is the source of the friction. However, it is more common to categorize the flow by the distinct phases that flow in the tube. Since there are three phases, they can be solid–liquid, solid–gas, and liquid–gas and solid–liquid–gas flow. This notion eliminates many other flow categories that can and should be included in multiphase flow. This category should include any distinction of phase/material. There are many more categories, for example, sand and grain (which are “solids”) flow with rocks and is referred to solid–solid flow. The category of liquid–gas should be really viewed as the extreme case of liquid-liquid where the density ratio is extremely large. The same can be said for gas–gas flow. For the gas, the density is a strong function of the temperature and pressure. Open Channel flow is, although important, is only an extreme case of liquid-gas flow and is a sub category of the multiphase flow.