Introduction: it is seen that there is a loss of head. Whilst some of this is due to the effect of sudden contraction or expansions in the pipe diameter, pipe fittings such as bends and valves and entry and exit losses, a loss of potential head (i.e. The input of the pipe is higher than the outflow) a significant portion is due to the friction in the pipe (The Darcy Equation). However in a pipe of uniform cross section, there will be no loss of velocity head and so the loss of Total Energy will be the result of a loss in Pressure Head. 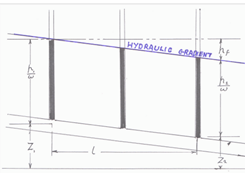 The Significance of the Hydraulic Gradient: Normally when a pipe is laid, attempts are made to keep the pipe at or below the hydraulic gradient. However in some cases this may not be possible but provided that the pipe does not rise by more than about 26 ft. (8 mtr.) water will still flow. Above this height air comes out of solution and an airlock is formed.

The Hydraulic Gradient: The above diagram is of an extremely simple system. On the next diagram the pipe has both a sudden contraction and an enlargement. The various losses in energy are shown and this is used to construct the Total Energy Line which is shown in red on the diagram. The velocity head at the salient points in the pipe are also calculated and these are subtracted from the energy line to give the Hydraulic Gradient which is shown in blue.