DETERMINATION OF COEFFICIENT OF DISCHARGE

INTRODUCTION: Inflatable dams, also called rubber dams, are flexible cylindrical inflatable and deflatable structures attached to a rigid base at either one or two ends(single or double anchor), made of rubberized material and inflated by air, water, or a combination of the two. Rubber dams have been installed in different parts of the world for various purposes such as irrigation, flood control, tidal defense, water supply and recreation. Inflatable dams can be used in different climatic conditions. 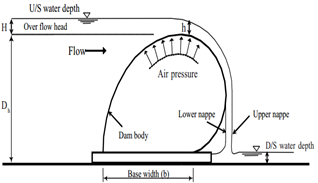 Most of the recently constructed inflatable dams were of an air-inflated type. The advantages of air-inflated dams over the water-inflated dams are discussed in the literature such as Takasaki (1989); Tam (1998); and Zhang et al. (2002). These can be summarized as follows:

ii) Water-filled pipes could freeze in cold regions and water-borne debris can clog the pipes.

iii) Water used to inflate the dam could pollute the river when discharged.

iv) Smaller diameter pipes are used with air-inflated dams than water-inflated ones.

vi) The installation time of air-inflated dams is relatively short.

viii) The shape of the air-inflated dam is more circular than the water-inflated dam; therefore the cross-sectional area of the dam is less, which means that the loads on the foundation are less, thus the required width of the foundation is also less.

where, Cd is the coefficient of discharge, q the discharge over the dam per unit length, H the overflow head as shown in Figure, and g is the acceleration due to gravity.

Materials and Methods: The study was performed using a rectangularglass-sided flume having a length of 20 m,width of 0.9 m and depth of 0.6 m. A rectangular sharp crested weir was placed atthe beginning of the flume to measure thedischarge in the flume. A baffle wasfitted in the flume across the flow located at 1 mdownstream of the rectangular weir. This bafflesuccessfully dissipated turbulence in the flow andcreated more uniform flow conditions. Theinflatable dam model was fixed at 8.5 m fromthe upstream end of the flume. Water surfacelevel and cross-section of dam were recordedusing a profile gage

Results and Discussion: From the experimental work, it is observed thatair inflatable dams are not suitable for highoverflow (when used as weirs) because highvibration occurred in the body of the dam whenthe ratio of H/Dh was approximately greater than0.2. Water-inflated dam is more stable than air-inflated dam and the vibration occurred when the ratio of H/Dh was approximately greater than 0.5 (not included herein). Anwar (1967) found that the dam body of air and water-inflated dams starts to vibrate when the ratios of H/Dh are greater than 0.25 and 0.6 respectively. This vibration may lead to a failure in the dam membrane due to abrasion between the dam body and the concrete foundation and also this vibration causes the flow over the dam crest to fluctuate.