INTRODUCTION: Diffusers and nozzles may either be the last part of a flow system, releasing the fluid into the ambient, or a conduit component within a flow system. These are two very different situations and as a consequence optimization occurs with respect to different aspects. The main purpose of using an end diffuser may be a high pressure recovery, while for a nozzle, however, it may be the homogeneity of the velocity profile, as for example with a nozzle in an open wind tunnel. When diffusers and nozzles are internal conduit components within a flow system, their purpose is to increase or decrease the flow cross sections as shown in Figure 1. On a length L the hydraulic diameter changes from Dhu to Dhd with the indices u and d for upstream and downstream. Then the otherwise fully developed flow is influenced by the components within an upstream and downstream length Lu and Ld, respectively. 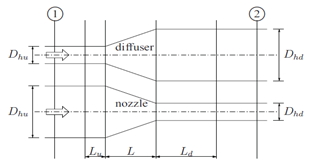 With Dhu, Dhd and L prescribed, the open question is which shape of the wall (different from the straight walls in Figure 1) will be the best. Here “best” means what can result in the least loss of total head due to the presence of the diffuser or nozzle.

This is the situation analyzed here: How to find the optimum conduit design by varying the wall shape of an internal diffuser or nozzle with prescribed values of Dhu, Dhd and L for a certain Reynolds number of the flow. The optimization target is to minimize the head loss coefficient with a value as low as possible. The main purpose, however, is not only to provide the information about the best diffuser or nozzle design but also to in

Head Loss, Dissipation and Entropy Generation: Diffusers and nozzles, used as internal flow system components, are characterized by their head loss coefficient K. This coefficient describes the conversion of mechanical energy to thermal energy by a dissipation process. A reasonable definition of K therefore is

With ϕ as specific dissipation due to the presence of the conduit component in the flow system.

Diffuser Optimization: The examination of various diffuser designs will be started by asking whether a good nozzle (determined just before) is also a good diffuser. It turns out that the answer is definitely “no” since the physics in both cases are very different. The crucial aspect is that of flow separation, which in a nozzle might happen as a local event but in diffusers, may determine the flow structure completely.

This becomes obvious when the straight wall cases are compared. An optimal nozzle with straight walls according to Figure 13 is very short, with L/D1 < 1. The corresponding diagram for a diffuser is very different. Good diffusers are very long, thus avoiding massive flow separation. In the best diffuser is that for L/D1 = 11.6 when L ∈[4D1, 11.6D1] is set. A further increase in L/D1 would eventually lead to an increase in K due to the frictional losses within the diffuser. Note that a diffuser with Re = 40000 corresponds to the nozzle with Re = 20000 when D1/D2 is set to 2 and 1/2, respectively, with the diameter in Re always being that of the conduit entrance. Then there is the same mass flow rate for both cases. Also, Figure 15 shows that now K-values are positive since kinetic energies for diffuser geometries cannot outbalance the pressure effects, c.f. Figure 11 for nozzles.

Conclusions: In this paper it has been shown how the entropy generation field obtained from a numerical simulation can be used to compute the K-value of conduit components as the target for optimization. Besides its advantages in the single objective optimization process, the ability of the second law analysis to contribute to the interpretation of the optimization results was illustrated for different nozzle and diffuser geometries. It was demonstrated how plots of the entropy generation in stream wise direction as well as upstream and downstream lengths of influence can be used to quantify the distribution of losses.