Introduction: Opposite of laminar, where considerable mixing occurs, velocities are high. 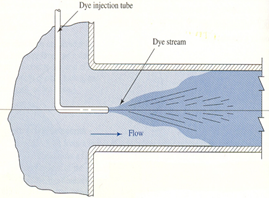 Turbulent flows can be characterized and quantified using Reynolds Number

Established by Osborne Reynolds and is given as:

When – units are considered – NR is dimensionless.

For 2000 < NR < 4000 – transition region or critical region: flow can either be laminar of turbulent – difficult to pin down exactly.

Reynolds numbers for some real-life examples:

Friction losses in Pipes: Energy equation can be given as:

Where hA, hR, hL are the heads associated with addition, removal and friction loss in pipes, respectively.

Note that the terms are added on the LHS of the equation!

The head loss in pipes = hL can be expressed as

Similarly, another equation was developed to compute hL under Laminar flow conditions only

If you equate Darcy’s equation and Hagen-Poiseuille equation. Then we can find the friction factor

Thus the friction factor is a function of Reynolds’s number.