Flow in a sudden expansion

Introduction: The turbulent fluid flows through sudden expansion passage have both fundamental scientific interest and numerous practical applications. In this type of flow the flow field consists of the separated boundary layer, a recirculation zone and a reattachment point. The experimental analysis for the recirculating flows in the downstream of the flat duct sudden expansion was presented by Aloui et al (2000).
Casarsa et al (2008) proposed that the flow structures were sensitive to the variation of the Reynolds number. Chaurvedi (1963) first analyzed the flow characteristics in the axi-symmetric expansion. The turbulent separated and reattaching flows produced by the sudden expansion in a pipe was studied by Davenport et al (1993). Guo et al (2001) numerically solved the unsteady turbulent flow behind the axi-symmetric the sudden expansion. By applying large-eddy simulation (LES) Ko et al (2002) examined the behavior of the turbulent flow inside the downstream of the sudden-expansion cylindrical chamber. Laufer (1954) carried out in detail the first experiment on the fully developed turbulent flow in a circular duct. By using the modifications of the standard k-ε model for streamline curvature Launder et al (1974) numerically investigated the turbulent flow in a circular duct. Moin et al (1997) by applying the direct numerical solution of the Navier-Stokes equations numerically solved the turbulent flow over the backward-facing step.
Physical Description: the flow geometry has been shown in the cylindrical coordinate system with 􀝎 􀵆 􀝔 axes. The flow at inlet is non-reacting and along the axial direction. In the figure the inlet velocity is shown by 􀝑􀯜􀯡. A fully developed velocity profile is taken at the inlet. The inlet axial velocity is uniform. The value of the inlet velocity varies from 1 m/s to 40 m/s. Here ri is the radius at the upstream of the channel and its value is taken to be 2.5 m. The radius of the passage at the downstream varies from 3 m to 4.5 m. The upstream length of the passage is 5 m and the downstream length of the passage is 30 m. Both the upstream and downstream length remains constant. It is to be noted that the no slip wall boundary condition has been taken for the solid wall and the fully developed flow condition has been taken at the outlet. While the zero shear stress condition has been taken for the axis. 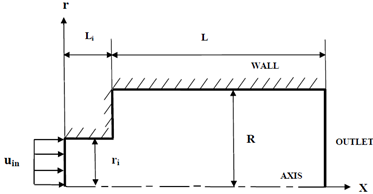 The total effective viscosity of the flow is given by,

The eddy viscosity, is given by