Introduction: Fluid particles move in circles about a point. The only non-trivial velocity component is tangential. This tangential speed varies with radius r so that same circulation is maintained. Thus, all the streamlines are concentric circles about a given point where the velocity along each streamline is inversely proportional to the distance from the center. This flow is necessarily irrational. 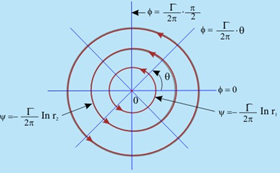 Velocity components: In a purely circulatory (free vortex flow) motion, the tangential velocity can be written as

Where is circulation
For purely circulatory motion we can also write


Stream Function: Using the definition of stream function, we can write

Combining Eqs. 1) And 2) with the above said relations for stream function, it is possible to write

Integrating Eq. With respect to dr, and considering the flow to be incompressible we have,

For a free vortex flow,
Hence Eq. Becomes
If the pressure at some radius r = ra, is known to be the atmospheric pressure patm then equation can be written as

Where z and za are the vertical elevations (measured from any arbitrary datum) at r and ra.
In a free vortex flow total mechanical energy remains constant. There is neither any energy interaction between an outside source and the flow, nor is there any dissipation of mechanical energy within the flow. The fluid rotates by virtue of some rotation previously imparted to it or because of some internal action.
Some examples are a whirlpool in a river, the rotatory flow that often arises in a shallow vessel when liquid flows out through a hole in the bottom (as is often seen when water flows out from a bathtub or a wash basin), and flow in a centrifugal pump case just outside the impeller.