Introduction: Consider a hypothetical fluid having a zero viscosity (μ = 0). Such a fluid is called an ideal fluid and the resulting motion is called as ideal or in viscid flow. In an ideal flow, there is no existence of shear force because of vanishing viscosity.

All the fluids in reality have viscosity (μ > 0) and hence they are termed as real fluid and their motion is known as viscous flow.

Under certain situations of very high velocity flow of viscous fluids, an accurate analysis of flow field away from a solid surface can be made from the ideal flow theory.

is not valid. For these fluids the viscosity varies with rate of deformation. 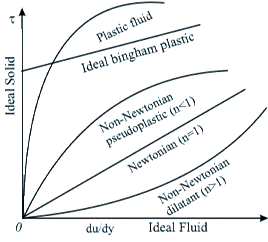 Due to the deviation from Newton's law of viscosity they are commonly termed as non-Newtonian fluids. Figure  shows the class of fluid for which this relationship is nonlinear.

The abscissa in Fig. represents the behavior of ideal fluids since for the ideal fluids the resistance to shearing deformation rate is always zero, and hence they exhibit zero shear stress under any condition of flow.

The ordinate represents the ideal solid for there is no deformation rate under any loading condition.

The non-Newtonian fluids are further classified as pseudo-plastic, dilatant and Bingham plastic.

Where Δ and Δp are the changes in the volume and pressure respectively, and is the initial volume. The negative sign (-sign) is included to make E positive, since increase in pressure would decrease the volume i.e for Δp>0, Δ<0) in volume.

For a given mass of a substance, the change in its volume and density satisfies the relation.