Introduction: The law of the wall is a description of the mean velocity profile in wall-bounded flows and has been accepted as one of the most important concepts in the turbulence community for at least 70 years. Barenblatt et al. (1997) and Barenblatt & Chorin (1998) however proposed that the velocity profile is not universal but in fact a weakly varying power law with coefficients that vary with the Reynolds number. This suggestion has important implications for the prediction of high Reynolds number flows because the correct formulation of scaling laws enables us to make predictions beyond the range of Reynolds numbers achievable in the laboratory. For example, according to the specification listed on EuRoPol GAZ's website, the Yamal–Europe pipeline operates at Reynolds numbers greater than 50×106. With a volume flow rate of 32.3×109 m3 of gas per year, accurate drag prediction is of the utmost importance.

Where U is the mean velocity and U =U/uτ. In outer-layer variables

For Reynolds numbers greater than about 106, the Super pipe data lie above this line, and McKeon et al. (2005) proposed a new correlation for smooth pipe flow, given by

Rough pipe: The Colebrook curve corresponding to ks=7.5 μm is also shown in figure . Clearly, the monotonic Colebrook curve makes a poor prediction for the transitionally rough behaviour of this surface. At the point of departure from the smooth regime, at ReD≃1.5×106, the Colebrook relation overestimates the friction factor by approximately 10%. In the transitional regime, instead of following the Colebrook correlation, the data display an inflectional roughness, similar to the behavior of the sand-grain roughness tested by Nikuradse (1933), despite the fact that honed surfaces are often classified as, in Colebrook's terms, ‘natural’ or ‘commercial’ roughness. 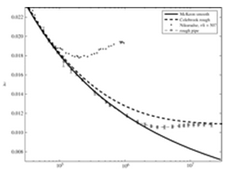 The downward shift of the velocity profile due to roughness can be characterized by the Hama roughness function ΔU , defined by writing the logarithmic law for a rough surface as

Here, ΔU was determined by finding the best fit of the data to the log law, with the assumption that κ=0.421 and B=5.6 (McKeon et al. 2004a). The value of 0.421 came from the curve fit to equation (1). The behavior of the Hama roughness function is shown in figure as a function of. An alternative way of writing equation (3) is to use the roughness height as the variable to non-dimensionalize space. Hence,