Our planet Earth has an average radius of 6373 km and a mean mass density of 5.527 g/cm3 compared with a mean mass density of soil particles of 2.7 g/cm3 and water of 1 g/cm3. Studies from elastic waves generated by earthquakes have shown that the earth has a core of heavy metals, mostly iron, of mass density 8 g/cm3 surrounded by a mantle. The mantle consists of two parts, upper mantle and lower mantle. The upper mantle is solid rock while the lower mantle is molten rock. Above the upper mantle is the crust, which may be as much as 50 km thick in the continental areas (Figure) and as little as 7 km thick in oceanic areas.

Plate Tectonics:
The crust and part of the upper mantle, about 100 km thick, make up the lithosphere. Below the lithosphere is the asthenosphere, which is about 150 km thick. The lithosphere is fragmented into about 20 large plates—large blocks of rocks—that slide against and move toward, away from, and under each other above hot molten materials in the asthenosphere. The theory governing the movements of the plates is called plate tectonics. Plate tectonics is based on uniformitarianism, which states that the earth’s forces and processes are continuous rather than catastrophic and the present is similar to the past. 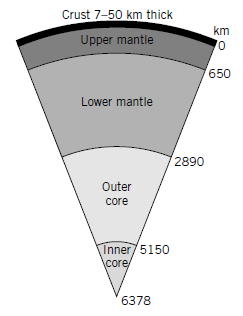 A sector of the earth.

The plates move slowly relative to each other but occasionally jerk, sending the energy contained in the straining rock in all directions. The energy is transmitted as shock waves. When these waves reach the surface, the ground shaking that occurs is referred to as an earthquake. The adjustment of the plates after an earthquake causes another set of shock waves that are referred to as aftershocks. The point at which the earthquake originates is called the focus and the point directly above it on the earth’s surface is called the epicenter.


As the shock waves move to the earth’s surface from the focus, they separate into body waves and surface waves. These waves travel at different velocities. Body waves comprise compression, or primary, P waves, and distortional, or shear, S waves. P waves are the fi rst to arrive at the surface, followed by the S waves. Surface waves comprise Love (LQ) waves and Raleigh (LR) waves. These surface waves have large amplitudes and long periods. The amount of seismic energy released is defi ned by the magnitude (M) of the earthquake. On the Richter scale, M is a logarithmic scale that ranges from 0 to 9. An earthquake of M 5 2 is barely felt, while an earthquake of M 5 7 could cause extensive damage.


At the edges of the plates, three phenomena are of particular importance:


1. A fault zone that occurs when the plates slide past each other.


2. A subduction zone that occurs when the plates move toward each other, causing one plate to move beneath the other.


3. A spreading zone that occurs when the plates move away from each other.