Composition of the Earth’s Crust

The materials that comprise the earth’s crust are sediments and rock. Sediments are solid fragments of inorganic or organic material resulting from the weathering of rocks and are transported and deposited by wind, water, or ice. Rocks are classifi ed into three groups—igneous, sedimentary, and metamorphic— based on the earth’s process that forms them. Igneous rocks are formed from magma (molten rock materials) emitted from volcanoes that
has cooled and solidified. Sedimentary rocks are formed from sediments and animal and plant materials that are deposited in water or on land on the earth’s surface and then subjected to pressures and heat.

The heat and pressures that are involved in forming sedimentary rocks are low in comparison to those for igneous rocks. Metamorphic rocks are formed deep within the earth’s crust from the transformation of igneous, sedimentary, and even existing metamorphic rocks into denser rocks. Their appearance and texture are variable. For engineering purposes, foliation (layering caused by parallel alignment of minerals), weak minerals, and cleavage planes are particularly important because they are planes of weakness. No melting takes place, so the original chemical composition of the original rock remains unchanged. The rock texture generally becomes coarser-grained.


Rock masses are seldom homogeneous and continuous. Rather, they consist of discontinuities that control the strength and displacements of the rock masses and the stability of any structure founded on them. Discontinuities in sedimentary rocks are called bedding planes. These bedding planes are planes that separate different bodies of sedimentary deposits. In metamorphic rocks they are called foliation planes. In igneous rocks they are called joints. However, the term joint is used generically to describe most discontinuities in rock masses. The terms strike and dip are used to describe the geometry of a bedding plane. Strike is the horizontal surface separation of a layer or bedding plane. Dip is the downward separation of a bedding plane. Rock masses may be distorted by folding. There are a variety of folds.

Two simple folds (Figure are anticlines—rock mass folded upward (convex)—and synclines—rock mass folded downward (concave). Folding results in unequal distribution of stresses within the rock mass and can cause major problems in civil engineering construction through uneven release of stresses. The movements of the plates cause ground fractures called faults. The three predominant faults are normal, thrust, and strike/slip. Tension causes normal fault (Figure ). An example of a normal fault is the Teton Mountains in Wyoming. Compression causes thrust or reverse fault (Figure 2.3b). Shear causes strike/slip fault (Figure ). An example of a strike/slip fault is the San Andreas Fault in California. Faults are rarely simple. They normally consist of different types of faulting.

Geologic Cycle and Geological Time:
The formation of rocks and sediments is a continuous process known as the geologic cycle. Sediments are transformed by heat and pressure into rocks and then the rocks are eroded into sediments. The cycle has neither a starting point nor an ending point. There are three main geological principles, given by
Nicolaus Steno (1638–1687), that govern the geologic cycle: 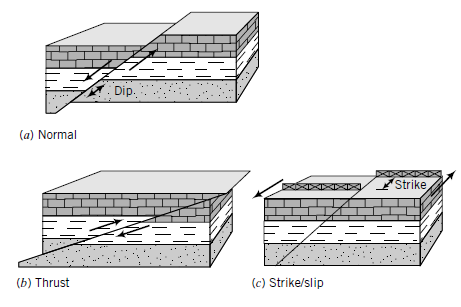