DETERMINATION OF PARTICLE SIZE OF SOILS


The distribution of particle sizes or average grain diameter of coarse-grained soils—gravels and sands— is obtained by screening a known weight of the soil through a stack of sieves of progressively fi ner mesh size. A typical stack of sieves is shown in Figure. 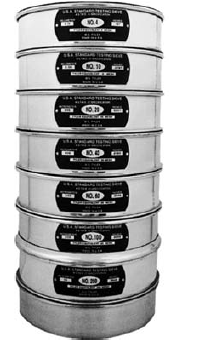 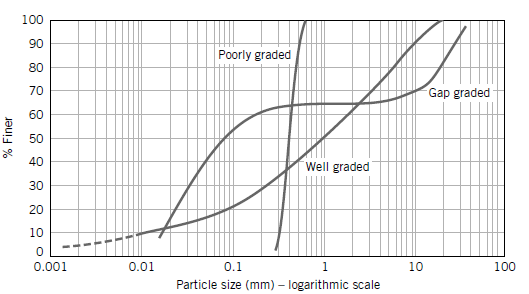 Each sieve is identifi ed by either a number that corresponds to the number of square holes per linear inch of mesh or the size of the opening. Large sieve (mesh) openings (25.4 mm to 6.35 mm) are designated by the sieve opening size, while smaller sieve sizes are designated by numbers. The particle diameter in the screening process, often called sieve analysis, is the maximum dimension of a particle that will pass through the square hole of a particular mesh. A known weight of dry soil is placed on the largest sieve (the top sieve) and the nest of sieves is then placed on a vibrator, called a sieve shaker, and shaken. The nest of sieves is dismantled, one sieve at a time.

The soil retained on each sieve is weighed, and the percentage of soil retained on each sieve is calculated. The results are plotted on a graph of percent of particles fi ner than a given sieve size (not the percent retained) as the ordinate versus the logarithm of the particle sizes, as shown in Figure  The resulting plot is called a particle size distribution curve or, simply, the gradation curve. Engineers have found it convenient to use a logarithmic scale for particle size because the ratio of particle sizes from the largest to the smallest in a soil can be greater than 104. Let Wi be the weight of soil retained on the ith sieve from the top of the nest of sieves and W be the total soil weight. The percent weight retained is

The percent fi ner is

You can use mass instead of weight. The unit of mass is grams or kilograms.