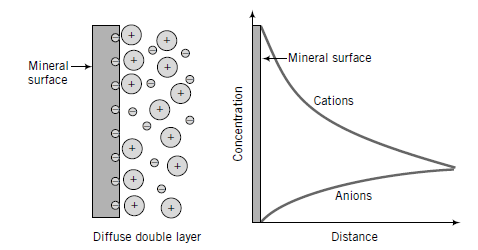 ranges from 65 to 100 m2 per gram. The surface area of 45 grams of illite is equivalent to the area of a football fi eld. Because of the large surface areas of fi ne-grained soils, surface forces signifi cantly infl uence their behavior compared to coarse-grained soils. The clay–water interaction coupled with the large surface areas results in clays having larger water-holding capacity in a large number of smaller pore spaces compared with coarse-grained soils. The surface charges on fi ne-grained soils are negative (anions). These negative surface charges attract cations and the positively charged side of water molecules from surrounding water. Consequently, a thin fi lm or layer of water, called adsorbed water, is bonded to the mineral surfaces. The thin fi lm or layer of water is known as the diffuse double layer (Figure ). The largest concentration of cations occurs at the mineral surface and decreases exponentially with distance away from the surface.

Surface forces on clay particles are of two types. One type, called attracting forces, is due to London–van der Waals forces. These forces are far-reaching and decrease in inverse proportion to l2 (l is the distance between two particles). The other type, called repelling forces, is due to the diffuse double layer. Around each particle is an ionic cloud. When two particles are far apart, the electric charge on each is neutralized by equal and opposite charge of the ionic cloud around it. When the particles move closer together such that the clouds mutually penetrate each other, the negative charges on the particles cause repulsion.

Soil Fabric:
Soil particles are assumed to be rigid. During deposition, the mineral particles are arranged into structural frameworks that we call soil fabric (Figure ). Each particle is in random contact with neighboring particles. The environment under which deposition occurs infl uences the structural framework that is formed. In particular, the electrochemical environment has the greatest infl uence on the kind of soil fabric that is formed during deposition of fi ne-grained soils. 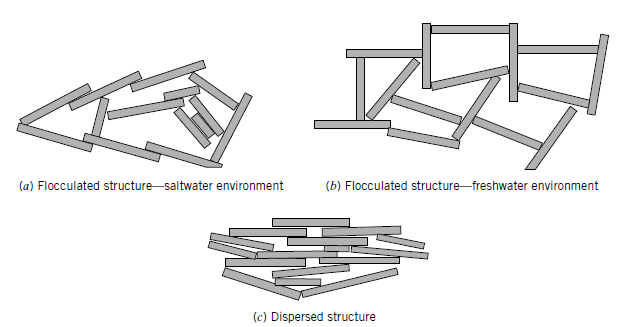