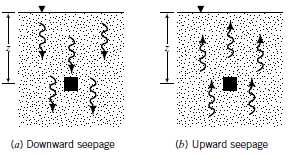 Seepage forces play a very important role in destabilizing geotechnical structures. For example, a cantilever retaining wall, shown in Figure  depends on the depth of embedment for its stability. The retained soil (left side of wall) applies an outward lateral pressure to the wall, which is resisted by an inward lateral resistance from the soil on the right side of the wall. If a steady quantity of water is available on the left side of the wall, for example, from a broken water pipe, then water will fl ow from the left side to the right side of the wall.

The path followed by a particle of water is depicted by AB in Figure , and as water fl ows from A to B, head loss occurs. The seepage stresses on the left side of the wall are in the direction of the gravitational stresses. The effective stress increases and, consequently, an additional outward lateral force is applied on the left side of the wall. On the right side of the wall, the seepage stresses are upward and the effective stress decreases. The lateral resistance provided by the embedment is reduced. Seepage stresses in this problem play a double role (increase the lateral disturbing force and reduce the lateral resistance) in reducing the stability of a geotechnical structure. In Chapters 14 through 15, you will study the effects of seepage on the stability of several types of geotechnical structures