If we apply an incremental vertical load, DP, to a deformable cylinder (Figure) of cross-sectional area A, the cylinder will compress by, say, Dz and the radius will increase by Dr. The loading condition we apply here is called uniaxial loading. The change in vertical stress is 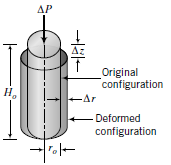 Forces and displacements
on a cylinder.

The vertical and radial strains are, respectively,

where Ho is the original length and ro is the original radius. In Equations. a negative sign should be inserted for expansion and a positive sign for compression. Thus, for radial expansion, Equation  should have a negative sign. It is not included here for generality. The ratio of the radial (or lateral) strain to the vertical strain is called Poisson’s ratio, n, defi ned as 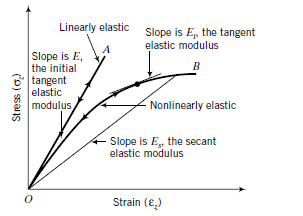 Linear and nonlinear stress–strain
curves of an elastic material.

then the total displacement is Dz 5 Dz1 1 Dz2. Elastic materials obey the principle of superposition.
The order in which the load is applied is not important; we could apply P2 fi rst and then P1, but the fi nal displacement would be the same. Some materials—soil is one of them—do not return to their original confi gurations after unloading. They exhibit a stress–strain relationship similar to that depicted in Figure 7.6, where OA is the loading response, AB the unloading response, and BC the reloading response. The strains that occur during loading, OA, consist of two parts—an elastic or recoverable part, BD, and a plastic or unrecoverable part, OB. Such material behavior is called elastoplastic. Part of the loading response is elastic, the other plastic.