STRESS AND STRAIN STATES:
Access www.wiley.com/college/budhu, and click Chapter 7 and then Mohrcircle.zip to download an application to plot, interpret, and explore a variety of stress states interactively. 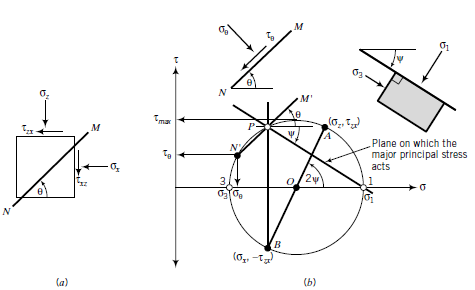 Stresses on a two-dimensional element and Mohr’s circle.

Mohr’s Circle for Stress States:
Suppose a cuboidal sample of soil is subjected to the stresses shown in Figure . We would like to know what the stresses are at a point, say, A, within the sample due to the applied stresses. One approach to fi nd the stresses at A, called the stress state at A, is to use Mohr’s circle. The stress state at a point is the set of stress vectors corresponding to all planes passing through that point. For simplicity, we will consider a two-dimensional element with stresses, as shown in Figure 7.12a. Let us draw Mohr’s circle. First, we have to choose a sign convention. We have already decided that compressive stresses are positive for soils. We will assume counterclockwise shear is positive and sz . sx. The two coordinates of the circle are (sz, tzx) and (sx, txz). Recall from your strength of materials course that, for equilibrium, txz 5 2tzx; these are called complementary shear stresses and are orthogonal to each other. Plot these two coordinates on a graph of shear stress (ordinate) and normal stress (abscissa), as shown by A and B in Figure 7.12b. Draw a circle with AB as the diameter. The circle crosses the normal stress axis at 1 and 3.

In the above equations, u is positive for counterclockwise orientation. The maximum (principal) shear stress is at the top of the circle with magnitude

For the stresses shown in Figure 7.9 we would get three circles, but we have simplifi ed the problem by plotting one circle for stresses on all planes perpendicular to one principal direction. The stress sz acts on the horizontal plane and the stress sx acts on the vertical plane for our case. If we draw these planes in Mohr’s circle, they intersect at a point, P. Point P is called the pole of the stress circle. It is a special point because any line passing through the pole will intersect Mohr’s circle at a point that represents the stresses on a plane parallel to the line. Let us see how this works. Suppose we want to fi nd the stresses on a plane inclined at an angle u from the horizontal plane, as depicted by MN in Figure . Once we locate the pole, P, we can draw a line parallel to MN through P as shown by M9N9 in Figure. The line M9N9 intersects the circle at N9 and the coordinates of N9, (su, tu), represent the normal and shear stresses on MN.