The Principle of Effective Stress


Let us consider an element of a saturated soil subjected to a normal stress, s, applied on the horizontal boundary, as shown in Figure  The stress s is called the total stress, and for equilibrium (Newton’s third law) the stresses in the soil must be equal and opposite to s. The resistance or reaction to s is provided by a combination of the stresses from the solids, called effective stress (s9), and from water in the pores, called porewater pressure (u). We will denote effective stresses by a prime (9) following the symbol for normal stress, usually s. The equilibrium equation is 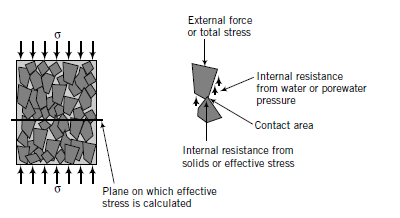 where ua is the pore air pressure, u is the porewater pressure, and x is a factor depending on the degree of saturation. For dry soil, x 5 0; for saturated soil, x 5 1. Values of x for a silt are shown in fig.