Soils, in particular granular soils, are endowed by nature with slip planes. Each contact of one soil particle with another is a potential micro slip plane. Loadings can cause a number of these micro slip planes to align in the direction of least resistance. Thus, we can speculate that a possible mode of soil failure is slip on a plane of least resistance. Recall from your courses in statics or physics that impending slip between two rigid bodies was the basis for Coulomb’s frictional law. For example, if a wooden block is pushed horizontally across a table (Figure 10.9a), the horizontal force (H) required to initiate movement, according to Coulomb’s frictional law, is

where m is the coeffi cient of static sliding friction between the block and the table and W is the weight of the block. The angle between the resultant force and the normal force is called the friction angle, f9 5 tan21m. Coulomb’s law requires the existence or the development of a critical sliding plane, also called slip plane. In the case of the wooden block on the table, the slip plane is the horizontal plane at the interface between the wooden block and the table. Unlike the wooden block, we do not know where the sliding plane is located in soils. In terms of stresses, Coulomb’s law is expressed as

where tf (5 T/A, where T is the shear force at impending slip and A is the area of the plane parallel to T) is the shear stress when slip is initiated, and (s9n)f is the normal effective stress on the plane on which slip is initiated. The subscript f denotes failure, which, according to Coulomb’s law, occurs when rigid body movement of one body relative to another is initiated. Failure does not necessarily mean collapse, but is the impeding movement of one rigid body relative to another.

Consider two particles A and B in the dense assembly and draw the free-body diagram of the stresses at the sliding contact between A and B, as depicted in Figure. We now appeal to our wooden block for an analogy to describe the shearing behavior of the dense array. For the dense array, the wooden block is placed on a plane oriented at an angle a to the horizontal (Figure ). Our goal is to fi nd the horizontal force to initiate movement of the block up the incline. You may have solved this problem in statics. Anyway, we are going to solve it again. At impending motion, T 5 mN, where N is the normal force. Using the force equilibrium equations in the X and Z directions, we get 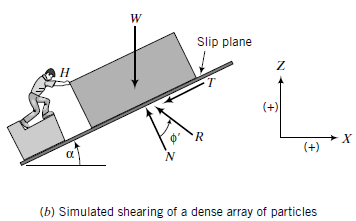 Simulation of failure in dense sand.

Solving for H and W, we obtain

Dividing Equations and simplifying, we obtain

By analogy with the loose assembly, we can replace H by tf and W by (s9n)f, resulting in